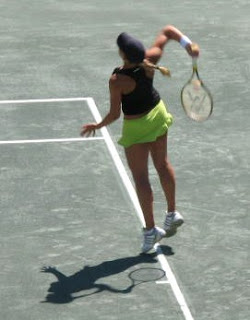 Tatiana Golovin, who suffers from Ankylosing spondylitis, has been advised not to play tennis anymore. The small piece of good news is that sometimes, the symptoms of spondylitis spontaneously disappear.

In an interview in L'Equipe, Golovin says that she still has hope, but of course, she is looking for a bit of luck.

Hailed as a prodigy when she was quite young (she made the biggest jump in rankings history), Golovin injured her ankles repeatedly and had trouble getting her career going. After working for a while with Mats Wilander, however, she began to show just why she was considered so special. She started having back pain, however, and in March of last year, underwent surgery to have a large cyst removed from her left hip.

Once the cyst was gone, Golovin expected her back pain to be gone, too, but it remained. She was then diagnosed with spondylitis, and has been off the tour for a year and a half. If she does not return, it will be yet another sad tennis story, for she has so much potential.
Posted by Diane at 10:23 PM

That is too bad. I like Golovin and was glad to see her start winning tournaments a few years ago. I was wondering what had happened to her.

This my account. My wife forgot hers and used mine. Her name is Sunny.