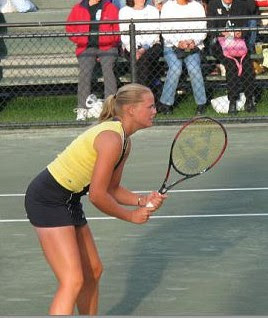 Anna-Lena Groenefeld, four months removed from competition, entered a $25,000 tournament near Lisbon last week, and lost to a qualifier. Her last tournament before the one in Spain was a Sony Ericsson WTA Tour Tier IV tournament in Stockholm, in which she was defeated in the second round by the often-crafty Tsvetsana Pironkova.

Currently coached by Dirk Dier, Groenefeld's problems have traced to her relationship with former coach, Rafael Font de Mora, whom she accused of taunting her while she played, and of helping her opponents. The unconfirmed word is that Groenefeld and de Mora filed suits against each other.

The German player is currently seeing a sports psychologist, and is working on both the physical and mental aspects of her game. She went from being rail-thin to obese (for an athlete) within a year, and de Mora stated bluntly that it was easy to beat her because she was "so fat."

Groenefeld was number 14 in the world before she took her terrible slide down the rankings.

I miss seeing anna-lena around, do you know what she will be up to after fed cup?

No, I don't. I don't know if she will continue to play challengers, or start to enter major tournaments.