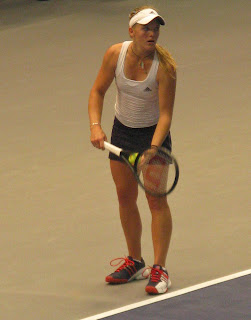 Melanie Oudin and Alla Kudryattseva ran onto the court as "Single Ladies" thumped out of the loudspeaker. It was the first rubber of the USA vs. Russia Fed Cup semifinal at the BJCC in Birmingham, Alabama, and both players were very obviously anxious, causing them to make several unforced errors. Being down 0-40 or up 40-0 meant virtually nothing. However, Oudin, down 1-3 in the first set, proceeded to right herself and win consecutive games, including the sixth, when she held after going down 0-30. 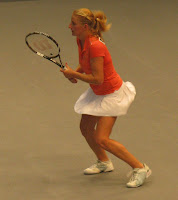 Oudin took the first set 6-3, but was immediately broken by Kudryattseva in the second set. After that, it was all Oudin, as the Russian continued to make make errors, most of which involved hitting the ball long to end rallies. Oudin took that set 6-3, also. 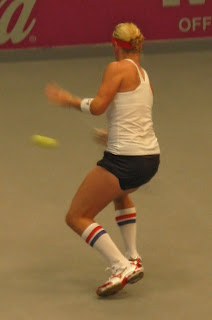 The second rubber was another story. Bethanie Mattek-Sands, wearing red, white and blue tube socks, faced world number 6 Elena Dementieva. The pair exchanged breaks to start the match, which was a somewhat entertaining affair in which Mattek-Sands saved two set points in the first set, raising the hopes of USA fans. But Dementieva would go on to win it, 6-4.

The first game of the second set was distinctive in that Mattek-Sands hit four defenstive lobs in a row before losing the point. There was a crucial moment when Dementieva served at 3-2 and saved three break points. She would go on to win the second set 6-3. 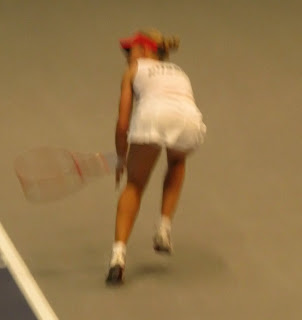 Tomorrow, Oudin will play Dementieva. Oudin defeated the Russian in the second round of the U.S. Open, but lost to her in the semifinals in Paris this year. Both matches went three sets. Mattek-Sands will play Kudryattseva. They have played each other twice, both times on hard courts, and have each won a match.
Posted by Diane at 6:58 PM