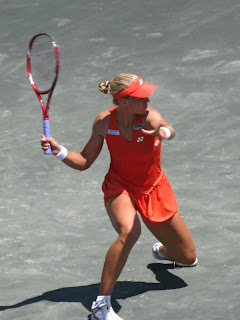 Maria Sharapova may not yet be ready for prime time, but she's certainly showing all the old Sharapova spirit. Looking tired and sometimes puzzled during today's Rogers Cup final, she nevertheless willed herself to make a number of small comebacks in a match dominated by 4th seed Elena Dementieva. The two players combined to hit 17 double faults, and there were some frustrating moments, especially for Dementieva, who went about her business the hard way. But some of the rallies were superb, with both players demonstrating outstanding defensive play.

Sharapova, however, made twice as many unforced errors as her opponent, and Dementieva won the title, 6-4, 6-3, in just over two hours.

Today's victory is Dementieva's 14th Sony Ericsson WTA Tour title, and her 50th match win of the season. Dementieva is now 14-14 in tour singles finals.
Posted by Diane at 3:29 PM

Yeah, I genuinely thought Sharapova might win. Dementieva deserved it, though. Looking forward to see them in Toronto next year too.