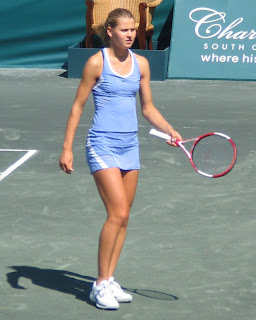 If you are a fan of Lucie Safarova, I feel for you. As a big fan of a notable left-handed under-achiever, I know how frustrating the experience is. Safarova has a great deal of tennis talent, but it is hard for her to string together victories. Suddenly, in Toronto this week, she's found her groove. First she took out Kaia Kanepi, then Ana Ivanovic, and today she defeated the formidable Zheng Jie.

It was an interesting day. Both Bondarenkos went out, but not without fighting. (After all, they're the Fighting Bondarenkos.) Alona fought the wind, then she fought her coach. She fought Serena Williams, too, but even Bondarenko's considerable second set boost couldn't get her to a third set. Kateryna gave Agnieszka Radwanska a harder fight, in a match that held an unexpected momentum swing in the second set. However, Radwanska prevailed, 7-5, 6-3.

Maria Sharapova upset 7th seed Vera Zvonareva in a match in which Zvonareva showed all of her trademark frustration, especially in the first set, when she just couldn't seem to do anything right. Sharapova took that set 6-2, with Zvonareva holding her serve only once. Zvonareva then began the second set by double-faulting four times in a row, which is a bit extreme even for these days of double-faulting 17 times in a match.

Zvonareva had the trainer wrap her ankle during the match. She also pulled herself together, and the second set contained moments of brilliant shot-making by both players. A few of the rallies were breathtaking, in fact. Sharapova--whose serve has suddenly improved--won, 6-2, 7-6. Both Russians are on the comeback path, and here's hoping that both of them continue to improve. (If anyone knows whether Vera has split with Sam Sumyk or whether she just had a substitute coach in Toronto, please let me know.)

Finally, there was the battle of the straddle. Wild card Kim Clijsters and 5th seed Jelena Jankovic, two of the best and most flexible movers around, took to the court quite late because of this evening's hour-and-a-half rain delay. Clijsters took the first set easily, but Jankovic bounced back and took the second. Serving at 3-4 in the third, Jankovic saved four break points before finally getting broken. Clijsters, serving for the match, immediately went down 0-30, and was soon broken. Jankovic held, then broke again, and went on to win the match 1-6, 6-3, 7-5.
Posted by Diane at 11:55 PM