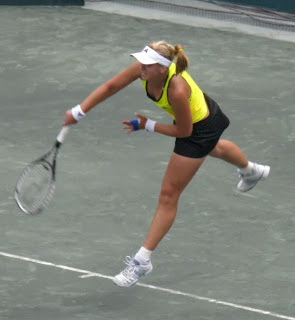 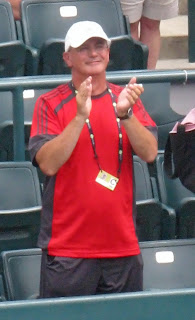 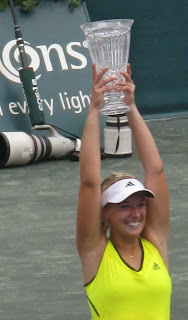 Sabine Lisicki, the 19-year-old German whose first and second names were routinely mispronounced by almost everyone who spoke them throughout the Family Circle Cup tournament, is not a stranger to some of us. Known as the player who beat Lindsay Davenport in a Fed Cup match, Dinara Safina at the 2008 Australian Open, and Anna Chakvetadze last year in Miami--Lisicki has matured considerably as a player in the last several months.

Only three months ago, I wrote that Lisicki needed to learn how to think and hit the ball at the same time. She had ball-bashing down, but needed touch and strategy. She has them now. And she has confidence, something she apparently lacked before, when she would lose every match that followed a big win.

The affable German, who is coached by her father, put on a serving clinic during this year's Family Circle Cup, hitting a total of 36 aces during her six-match championship run. Some were speedy, some were soft and tricky. Her serve was broken only eleven times during her week in Charleston. With tour players having so much trouble with their serves these days, someone like Lisicki is in a good position to move up nicely in the rankings.

But there is more to Lisicki than her serve. Her forehand and backhand down the line are excellent, and her movement is deceptively good. It is rare for a player to win her first tournament at a big affair like the Family Circle Cup, but about halfway through the week, we would see Lisicki walk by and one of us would say "She's going to the final." She was that good, and she was that confident. She made a lot of fans this week, and will probably make a lot more this season.
Posted by Diane at 4:08 PM

Hi Diane. Like your site but what is up with the pet-peeving on name pronunciation? Is it really that big of a deal? You recently talked about Wozniak on here and got her first name wrong (it's Aleksandra, not Alexandra). Surely spelling names correctly is just as important as pronunication, isn't it? Glass houses and all that.

If you were blogging a week-long tournament on your own non-stop and taking care of a dozen other things--you, too, would probably make a typo now and then. Just an educated guess, Anon. And the typos that are made are always corrected, usually before someone points them out.

And yes, it is a very big deal, not a "pet peeve." There is little less insulting than not bothering to learn how to pronounce someone's name. And if you are paid to say names--if that is your job--then it is beyond insulting--it is lazy and unprofessional.

A typo is a mistake. Not bothering to learn how to pronounce someone's name is rude, and--in the case of announcers and commentators--unprofessional.

So I wonder how they are pronuncing her name, she is of polish decent, (she said in recent interview, that polish and german was spoken at home) her family emigrated from Poland, and Polish would say her name Li-sidz-ki, (similarly Woz-niadz-ki) but I heard the comentators droping that "c" and saying it Li-si-ki, which for me is just incorrect!

They are usually saying Li SIK i. And they are having a field day with her first name--Sa BEEN, Sa BEEN ah, etc. They aren't doing that well with Wozniacki's name, either.

i know Sabine now over four years and have followed her all this time .

Here's the pronounciation of her name from her WTA profile. I would think that's official enough.

I was in the stands and was calling out her name in reliance on the WTA info; if that was incorrect, then the WTA should correct it.

I, too, think you should lighten up a bit about the pronunciation; I think most people try to get it right. It wasn't that long ago that after years of pronouncing Safina "sa-FEE-nuh" that we were told that she prefers "SA-fin-uh" and we're still not sure how to pronounce Jokovic's name - alternately saying a long o or a short o.

Nonetheless, after Sabine's performance in Charleston, I think many more people will get the name right.

I have only two words to add to this discussion:

Anon, if you still don't understand the difference between a mistake made in haste and professional laziness, there isn't much I can do to help you grasp it.

Having often been the victim of a mispronounced surname I try to get people's names right but for some reason it's just extremely difficult with tennis players. For one thing, the official tour websites either omit the pronunciation and often err when they do include it. And the TV announcers are too often clueless. What's a tennis fan to do? Diane, please, please, please do you have a link to a site with correct pronunciations or have you thought of starting one? I have often thought that the tours should include a sound clip with the correct pronunciations. Is it just me or do the umps seem to be a bit better with pronunciations, e.g. Lyn Welch...?

One more thing...I first saw Lisicki play at the Hopman Cup. Wow! I vowed to see her play again. So imagine my acute dismay when I realised on Sunday night that I'd missed her Charleston final on ESPN2! I'm very happy she won but a week later I'm still bummed that I missed seeing it.

I don't know of a site that has correct pronunciations. The tour does try, though it makes an error from time to time, and--as you point out, Mel--the tour site does not include pronunciation guides for all players. Some umpires do better than others; I think it's safe to say that the umpires certainly do better than U.S. commentators.

I do not have the energy to build a pronunciation site, but it would be nice if someone would, and the sound clip function would be the way to go.

I'm really sorry you missed Lisicki's win in Charleston. Her entire run there was stunning. She got better with every match she played, and by the time she reached the final, her victory felt inevitable.

there isn't much I can do to help you grasp it.

I'm great with teasing if it has rhetorical relevance to the topic. You are talking about a totally different subject than I am, so the "teasing" makes no sense.

Lets not leave out the Swedes in the pronunciation quibbles. Robin Soderling has a double dot on the "o" so should really be "Surderling" like the former Swedish player Byern Borg.