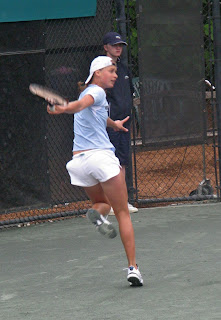 On Saturday, I wrote about how impressed I was with Lenka Wienerova's athleticism and grace. I didn't get to see her win her second qualifying match, but I did see her play most of her first round match against Alexa Glatch, another player I enjoy watching. Wienerova took the first set 6-4, but went down 2-5 in the second. I expected a third set, but Wienerova suddenly reeled off five games in a row, and did so with such finesse that it was a sheer delight to watch her do it. Serving well, defending well, slicing the ball, and exhibiting some very nice hands along with her athletic skills--the young Slovakian put on quite a show.

One thing that made this match very unusual: I'm not sure I've ever seen as many drop shots--not to mention successful drop shots--hit in one match. And by both players. It was just drop shot after drop shot, with one or two drop volleys tossed in. Glatch herself is a player with a variety of skills, but she couldn't keep up with the spirited Wienerova.

When the match was over, Wienerova was mobbed by autograph seekers, and as she left the club court, we initiated some applause for her. It quickly spread throughout the stands, and Wienerova left Althea Gibson with a big smile on her face.
Posted by Diane at 7:23 PM