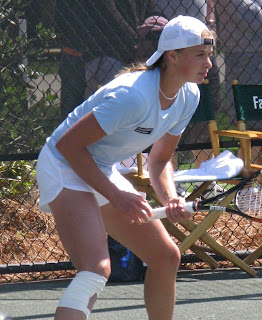 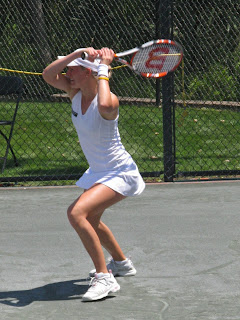 SMASH Junior Cup winner Alison Riske lost her match, but is definitely a player to watch
For the first time since I've attended the Family Circle Cup, it was hard to find a parking space for qualifying. Fourteen qualifying matches were played today, and we saw at least some of six of them. We also watched a very long practice session, featuring Vera Zvonareva and Marion Bartoli. They signed photos for us, and Zvonareva signed a tennis ball. They both looked sharp, too. After that, we watched Alex Stevenson do some warm-up exercises.

I was eager to see Alison Riske, the girl who won the SMASH Junior Cup, and therefore, a wild card into Charleston qualifying. Riske was most impressive, and held her nerve until the end, when it finally gave way a bit, and she lost to veteran Abilgail Spears. I would definitely call Riske a young player to watch. She has very clean strokes and a lot of confidence and fighting spirit, and she is thinking the whole time she is on the court.

Another player who impressed me was Lenka Wienerova, whose athleticism is something to see. She easily defeated Ahsha Rolle in straight sets, and was able to cover the court with a lot of grace and flexibility.

Madison Brengle and Gail Brodsky were enjoyable to watch in a match that Brengle won in straight sets.

I have always thought that Anna Tatishvili was worth watching. She suffers with the tennis father problem, and has never really advanced in her career. Today, she was hitting really hard, and moving well on the court. Her opponent was U.S. Open junior finalist Gabriela Paz Franco, a good court thinker, made it a competitive match, with many changes of momentum. Paz Franco struggled more with her serve, however, as well as her temper (she tossed a racquet over the fence). It was a high quality match, from which Tatishvili emerged victorious, 7-6, 6-3.

Tennis outfit of the day: Gail Brodsky, in a white dress with triple blue tiers at the bottom.
Posted by Diane at 6:21 PM