The Lisicki watch has begun 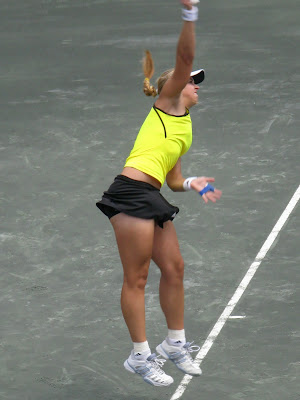 Sabine Lisicki's Family Circle Cup win has a lot of people in the tennis world buzzing. It wasn't just what she did--winning as the 16th seed--but how she did it. Never dropping a set and rarely having her own serve broken, Lisicki made it look so easy.

I've had my eye on her for a while, as readers of this blog know. Even as late as the end of last season, I was frustrated by Lisicki's poor strategy-to-hitting talent ratio. I observed more than once that if she ever began to use her head as well as her hands and feet, she could be a threat. What I saw in Charleston was a revelation--Lisicki had figured out the delicate moves as well as the aggressive ones, and she had figured out how to take control of matches.

On her way to Charleston, the 19-year-old remarked to her mother that she hoped the draw was such that she would play Venus Williams because she thought she could beat her. She was right about that. Lisicki came from behind in both sets to overtake Williams in the third round.

I regret that I saw only a small portion of Lisicki's first round match against Marie-Eve Pelletier. I was busy trying to watch several matches at once, so I let that one go after half a set. Pelletier lost with a very respectable scoreline--7-5, 6-4. I did watch Lisicki's second round match against Lenka Wienerova, one of three players who impressed me very much at this year's Family Circle Cup (the others being Lisicki and Melanie Oudin). Wienerova gave Lisicki a lot of trouble, but Lisicki prevailed, 6-4, 6-3, in a very well-played match. Wienerova was quite dejected after the match, but she may have eventually come to feel a bit better, given the outcome of the tournament.

Lisicki's next opponent, of course, was Williams, and even when the 16th seed was behind, I had the feeling she was going to get herself out of trouble--there was just something so dominating about her play. After defeating Williams, Lisicki had to face the very tough Elena Vesnina. But Vesnina's level of play came down significantly during the quarterfinals, while Lisicki's went up. That level continued to go up when she played Marion Bartoli, and the German's momentum all but exploded in the final against Caroline Wozniacki.

Much is made of Lisicki's speedy serves, but many of her serves are not speedy at all--they are just tricky. She makes very good use of the drop shot, and her returns are Jankovic-like in that they frequently allow her to come from a defensive position and take control of a rally. According to Toby Keel, both Virginia Wade and Stan Smith have picked her to be a star, and Simon Reed is calling her "the real deal."

A few days into the Family Circle Cup, I had a brief chat with Lisicki, who--for me, at least--was ubiquitous on the grounds. I commented on how much she had added to her game in such a short time. "Really?" she glowed. "Do you think so?" She continued to glow for the remainder of the tournament, and--after she won it--asked to have her photo taken in front of the banner depicting former Charleston champion Jennifer Capriati. Next year, Lisicki's own likeness will be on a giant banner outside the stadium. By then, I think a lot more people will know who she is.
Posted by Diane at 9:52 PM

congratulation on this beautiful article and how right you are . i have been following Sabine since may 30th 2005 and as you so well said this is her breakthrough both physically and mentally and from here it is only way up.
we will hear a lot of Sabine in the coming years.

Thanks, henri. It's nice to have someone new to watch.