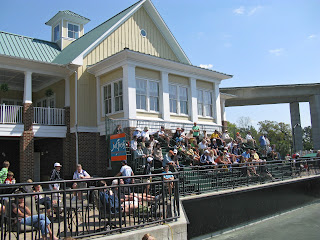 Fans watch from the stands of the Althea Gibson Club Court, in front of the player lounge
I got 'em. Though today was cool and beautiful, we are expecting a lot of rain tomorrow. But that's nothing compared with the rest of my Charleston issues.

It all started when I noticed there was no T-shirt design contest this year. The contest has always bothered me a bit because the prize money was too small, but it was nevertheless a nice tradition. So it turns out that the reason there was no design competition is that there is no tournament T-shirt. That's right--a premier tournament in a major city, and there is no official T-shirt.

Yesterday, we stopped off at the guest services booth, which has been moved, to check out the practice schedule. Only it wasn't posted. The people in the booth said it hadn't been sent to them. Today, it still wasn't there. The staff has also been slow (by Family Circle Cup standards) to post scores.

So what is going on in Charleston? The simple answer is most likely the correct one: Robin Reynolds, the tournament's wonderful director for the last several years--and its public relations and marketing director prior to that--is gone. Under Reynolds' direction, everything ran like clockwork, and every tiny detail was taken care of before you ever realized you needed it done. The staff is still very nice and helpful, and the facility is still beautifully maintained, but something has changed.

The WTA "Roadmap"--the new and drastically changed tour schedule--includes a decrease in prize money for the Family Circle Cup, as well as a decrease in points awarded to players. Though the tournament has retained its "premier" status, it has been somewhat demoted. Robin Reynolds may have taken a dream job, she may have retired, she may have changed careers or moved to another state. But I can't help but wonder if she didn't leave her post when the tour began hacking away at her tournament. It probably won't be the last time I say this, but--once again--thanks, Larry Scott.

It's a tough year for the Family Circle Cup. Serena Williams, Victoria Azarenka and Jelena Dokic withdrew. The player field in Barcelona includes many players who are either Charleston regulars or almost-regulars. The prize money and points are not what they used to be.

This should not be happening. If one tournament on the Sony Ericsson WTA Tour stands for women's sports advocacy, it's the Family Circle Cup. The very first champion, Rosie Casals, won more prize money than had ever been given to a female tennis player, and she won it amid protests. The Family Circle Cup was the first women's match to ever be televised, and it was televised amid protests. The tournament is the longest-running women's tennis event to be sponsored by the same company, and that company was the first ever to fully sponsor a women's tournament.

In addition to the tournament's history of innovation and advocacy for women, it is also a tournament which is very fan-friendly, and whose facilities lend themselves to optimum fan comfort. Both Charleston and Mt. Pleasant are nearby, so there is plenty of good dining and recreation. Even better, the tournament is played on clay, an American rarity.

The Sony Ericsson WTA Tour needs to take action to restore the Family Circle Cup's prestige. An event of this stature deserves better treatment.
Posted by Diane at 3:34 PM