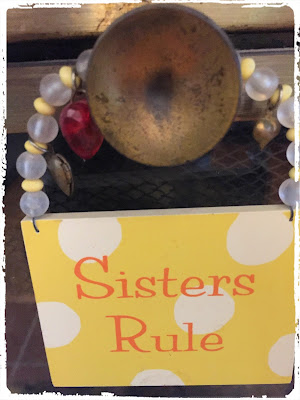 Kiki Mladenovic and Alize Cornet took to Philippe-Chatrier Court today at the French Open, though it wasn't easy. A violent thunderstorm blew out power, and for a while, there was no view for those of us watching on television, followed by a simple one-camera view.

The view was far from scenic for defending champion Serena Williams, who watched break points whiz by the way a ball hit from her own racket might have shot through the cloudy sky in Paris. Her opponent, Mladenovic, had a great deal of trouble holding serve. Serving is an all-or-nothing affair for the Frenchwoman. When she's "on," she can do great damage with her serve. The rest of the time, it does damage to her.

But she certainly knows how to save break points, especially when she gets some help from the other side of the net, as she did today. Having lost the first set 4-6, Mladenovic French-flaired her way to a second set tiebreak, only to have the rain come. Two and a half hours later, the two women resumed play, with Mladenovic going up 3-0. But this was Serena on the other side of the net, and the world number 1 would have no more delays: She defeated Mladenovic 6-4, 7-6.

Meanwhile, on Suzanne-Lenglen Court, Venus Williams faced another Frenchwoman, Alize Cornet, and we wound up with another somewhat strange scoreline (though nothing that would threaten Shelby Rogers' hold on that category). Williams defeated Cornet 7-6, 1-6, 6-0 to advance to the round of 16.

With no Tennis Channel Plus (NBC took over coverage in the late morning), those of us in the USA had to miss the entire match played between Kiki Bertens and Daria Katsatkina. Naturally, this was the match I had most wanted to see (like yesterday, the match I most wanted to see was the Radwanska vs. Strycova match, but I had to go give a talk and then keep a brief medical appointment--without bad luck, no luck at all). I don't know if it will be available on demand on TC+, but I surely hope so.

Here is the round of 16 draw in singles

Unseeded players make up one quarter of the draw at this point. The presence of both Bertens and Putintseva is not at all surprising to me. Shelby Rogers' impressive run is something I didn't see coming, and only a fool would make predictions about Pironkova at a major.

I think the round of 16 draw is potentially quite entertaining, given the cast of characters. The French drama has been shut down, but there's still Putintseva, whose occasional carrying on (thank goodness she's at least out of juniors) may make some forget just how well she's been playing lately. (This is, of course, a whole different scenario in Charleston.) And who knows which Sveta will show up?--or which Garbi? For that matter, both Halep and Stosur can run hot and cold, and they have to play each other.

The Chan sisters advanced to the third round in doubles today, and in mixed doubles, Martina Hingis and partner Leander Paes advanced.
Posted by Diane at 2:36 PM