Another beautiful tennis day in Charleston 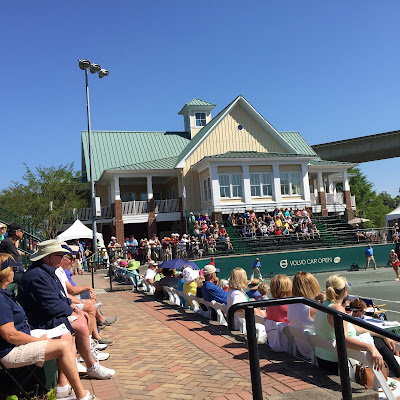 As I write this, an hour and a half before Volvo Car Open quarterfinal play begins, it's 59 degrees and sunny in Charleston. The forecast for today is 71 degrees, and skies are expected to be sunny or partly cloudy. However, around 2 p.m., wind speed is expected to increase to 17 mph and then continue to increase a bit for the next several hours.

Wind is always a factor in play on Daniel Island. Sometimes it's the expected wind that players learn how to manage according to the side of the net on which they're playing. But sometimes, like yesterday, the wind swirls in all directions, providing a particular challenge for competitors.

Singles play starts at 1p.m. today, when defending champion and top seed Angelique Kerber faces off against Irina-Cameia Begu. Last year, Kerber and Begu also played one another in the quarterfinals here, with Kerber winning 7-6, 7-6, after going down 1-5 in the first set. This was one of the best matches of the tournament, with the steady, creative Romanian throwing a clay court style book at the German. Begu may be a bit tired today: She spent almost two and a half hours last night, battling against Monica Puig, who held a match point in their third round encounter.

Doubles play begins at 10:30 a.m., with top seeds Bethanie Mattek-Sands and Lucie Safarova going against Gabriela Dabrowski and Darija Jurak.
Posted by Diane at 8:14 AM