Gisela Dulko retired from professional tennis yesterday. For several years, Dulko, who is from Argentina, has served as the WTA standard-bearer for Latin America. Her singles career was a very good one, reflecting both her clay court finesse and her tendency to serve as one of the tour's most notable giant-killers. Her doubles career was outstanding. 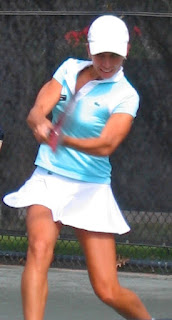 Dulko is a physically slight woman. Only five feet, seven inches tall and weighing under 125 pounds, she doesn't appear to be "built" for tennis. I recall watching a match she played against Serena Williams in Charleston. I dislike quoting anything sexist, but it's worth noting that--in the middle of the match--a man in the stands shouted "That little girl can hit the ball hard!" She could. And when her serve was "on," she could be pretty dangerous because of her all-court skills. That serve could come and go, however, and Dulko would often end up having to rely strictly on her defensive skills.

The Argentine star reached her highest singles ranking, number 26 in the world, in 2005. She won four WTA singles titles, reached the round of 16 at the French Open in 2006 and 2011, and reached the round of 16 at the U.S. Open in 2009. Dulko made it through the third round of the 2011 French Open by defeating 2010 runner-up Samantha Stosur. In 2009, she upset Maria Sharapova in the second round of Wimbledon.

It was in doubles, however, that Gisela Dulko stood out. She and close friend Flavia Pennetta were frequent doubles partners for  many years, though Dulko also played doubles with other partners. When the pair decided, in 2010, to play as an exclusive team, they had a marvelous run that included winning the 2010 WTA Championships and the 2011 Australian Open. Considering how well they played, it actually seems odd that they won only one major.

Dulko won 17 doubles titles (11 of those, she won with Pennetta), and was a runner-up 13 times. She also played on the Argentine Fed Cup and Olympic teams for several years. In November of 2010, Dulko reached a career-high doubles ranking of number 1 in the world. She held that title for 24 weeks; for 11 of those weeks, she shared the spot with Pennetta.

I have two special memories of Gisela Dulko. One concerns a spontaneous exhibition match played in Charleston a few years ago when a night match had to be canceled because of a participant's injury. Dulko and Pennetta "played" against Liezel Huber and Katarina Srebotnik, and Lynn Welch was the umpire. I generally get only moderate pleasure from watching exhibition antics, but this was a hilarious event; I laughed until I cried. And though everyone involved contributed to the hilarity, the standout comic was Dulko. I don't think any of us (fans, that is) knew how funny Dulko was until that night.

My most vivid memory of Dulko, however, was watching her (on television) in the 2011 Australian Open final. She and Pennetta played Victoria Azarenka and Maria Kirilenko for the title. Dulko and Pennetta came out of the tunnel looking fierce, but Dulko went to pieces early in the match, and left most of the heavy lifting to her partner. Azarenka and Kirilenko (who also wasn't playing quite up to her usual level) won the first set 6-2. They went up 4-1 in the second set and were one point away from going up 5-1 when Gisela Dulko simply went crazy on them.

Parking herself at the net and madly hitting every type of volley imaginable, Dulko appeared driven by a force that just couldn't be overcome. She and Pennetta won the second set 7-5, then handily won the third set 6-1. Unfortunately, the sports media was focused on singles play, and this very dramatic championship match was all but ignored.

Injury got the better of Dulko toward the end of her career. In 2011, she married footballer Fernando Gago. It was no surprise that, at age 27, she decided to put down her racket. I encourage you to read the beautiful letter she wrote to her fans, her team and the tour. There are undoubtedly a whole lot of fans who will miss the versatile and engaging Gisela Dulko. I know I will.
Posted by Diane at 9:42 PM

Another memorable Dulko moment, though it wasn't "technically" about her: she was the player on the other side of the net when Azarenka (pre-match concussion) collapsed at the U.S. Open during their 2nd Round match in 2010 and was hospitalized.

I forgot that it was Dulko who received Azarenka's most famous retirement. Must have been scary.

Thanks for sharing the final of the Aussie 11 - I'm going to have to go find a recording of that comeback. Loved Dulko...

You're welcome, Mark. It's definitely worth seeing.

My fondest memory of Dulko was watching her play some awesome grass court tennis to take out Sharapova at Wimbledon. She played what I considered to be one of the best grass court matches I have ever seen (and I am a Venus fan) LOL

Now that you mention it, Karen, I do remember being amazed at what Dulko was doing on a grass court in that match. I love those kinds of tennis "surprises."

Oh, and speaking of grass court tennis, Dulko was also the player who defeated Navratilova at Wimbledon (and Roland Garros, too) during her 2004 singles comeback matches.

I'd forgotten about that, too, until I saw it on the WTA site. She had a really good career--a star in doubles and a trouble-maker in singles.