A still-ailing Petra Kvitova lost her Fed Cup match (6-3, 7-5) against a very in-form Ana Ivanovic today in Prague, but no worries for the Czech Republic: Lucie Safarova stepped in and took her second win by defeating Jelena Jankovic 6-1, 6-1. "I played one of the best matches of my career," Safarova said afterwards.

The Czech Republic won 3-1 against Serbia in the final; the dead doubles rubber was not played.

In the 50-year history of Fed Cup, no team has ever won the final after going down 0-2, as Serbia did yesterday.

Here are some good photos posted on Kvitova's Daily Mail blog. My favorite photo of the week, however, is this one: "Do you think I had enough coaches on the court with me? I'm not sure...." 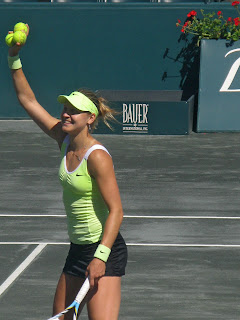 The Czech Republic (in its present configuration, and also as Czechoslovakia), has now won Fed Cup seven times. So has Australia, which--coincidentally--will be the Czech Republic's first round opponent when 2013 competition begins in February.

The Czech Republic is the number 1 Fed Cup team in the world. Petr Pala is the Czech Fed Cup captain.
Posted by Diane at 7:34 PM

Hmmm, Mladenovic's WTA site bio now lists her with one WTA singles title, so I guess the tour is counting these 125s as lower-level, but "official" tour events when it comes to titles, etc.

It appears that's it is a WTA title, and that "tiers" are returning, if only in a small way. The explanation is that up-and-coming players have a chance to compete more. I don't buy into it, but you know me--I wish they'd do away with the Tournament of Champions.

I always liked the old "Tiers" format. It was much easier to classify the "value" of a title when they were listed as I, II, III, IV or V rather than this miss-mash of "Premier" this and that, and now "125s."

Well, Oh Petra showed up for two matches. She played like Petra. Ana played fanstastically - the best that I've ever seen from her. Kudos to both. Petra did not cave in despite being under the weather.

It's one of my favorite photos of the season--Petra's face!

I think Fed Cup was good for Petra, and she did play really well. I just hope she can straighten out all these health issues.