When logic and proportion
Have fallen sloppy dead
And the White Knight is talking backwards
And the Red Queen's off with her head
Remember what the dormouse said: 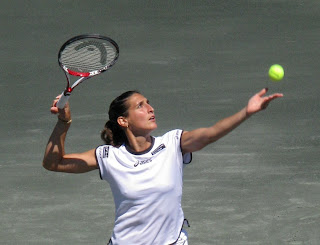 Serena Williams, Virginie Razzano and chair umpire Eva Asderaki took us for a three-hour trip down the Rabbit Hole today in Paris. The Rabbit Hole was filled with red clay, to be sure, but the experience was right out of the mind of Lewis Carroll. Consider these things:

Serena Williams, in 46 appearances in majors, had never gone out in the first round.

Asderaki was the umpire who sat in the chair during the 2011 U.S. Open final, when Williams--docked a point for what Asderaki interpreted as a hindrance--referred to her as "a hater" and "unattractive inside."

Razzano, just a year ago, entered the French open only a week after the death of her fiance, Stephane Vidal, saying that she was competing, however shakily, for him (she went out in straight sets in the first round).

Razzano is French, and the French crowd is known for its overwhelming enthusiasm and merciless expressions of disapproval.

Those things set the scene for some drama, but perhaps for not quite as much drama as we actually got.

First, a few words about Razzano, a player who--at least when she speaks in English--is given to ultra-expressive, and sometimes entertaining, language. We have had several glimpses of her talent over the years. Her performance in the 2009 Dubai tournament is an example. In that event, the Frenchwoman knocked off Kateryna Bondarenko, Dinara Safina, Daniela Hantuchova, and Vera Zvonareva (by retirement). She lost to Venus Williams in the final, but her run was nevertheless impressive.

During the 2009 French Open, Razzano and Tathiana Garbin engaged in one of the outstanding matches of that event, and my personal favorite. With the wind swirling around them, Razzano defeated Garbin 7-5, 7-5 in a match that was a shotmaker's dream.

Hard times hit the 29-year-old Razzano, in terms of both injury and the loss of Vidal, who had also been her coach. She came to today's match ranked number 111 in the world, though she has been ranked as high as 16. Her opponent was world number 5 Serena Williams, holder of thirteen major singles titles, and a favorite (for the first time in years) to win this year's French Open. Williams won both the Charleston and the Madrid tournaments this year, showing her talent on both green and blue clay. 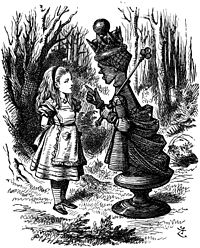 "I don't know what you mean by your way, said the Queen: "all the ways about here belong to me--but why did you come out here at all?"

Williams was 17-0 on clay this season when she arrived on Court Phillippe Chatrier. Razzano was1-1. But right from the start, it was Razzano who looked confident, and Williams who looked hesitant. Razzano quickly went up a break, but lost the set when--serving at 4-5, she double-faulted the game, and the set, away. She had looked very strong in that first set, though conventional wisdom would predict her capitulation to the champion on the other side of the net.

Razzano wasn't interested in conventional wisdom. She knew that Williams was tense, and she came out in the next set with the same resolve she had shown in the first. That set contained some very physical tennis--the kind that occurs on red clay--and Razzano suffered what appeared to be a cramp in her leg. The set went to a tiebreak, and Williams quickly went up 5-1. At 5-3, Williams stopped play because she believed that her opponent had struck the ball out of bounds. But Asderaki called the ball in, and suddenly, Williams led by only one point.

Razzano--nerves, exhaustion, cramps and all--kept at it, and she won the tiebreak 7-5. During the break between sets, Williams sat with her face in a towel, fighting back tears. She had let the match slip away by her stubborn resistance to the demands of the red clay court grind.

But she was down only a set, and how many times had Williams come back after being a set down? Also, her opponent was injured, and visibly nervous, committing double faults at crucial times. She had to put her own nerves, her own disappointment, her own errors, aside, and proceed with the rest of the match. What neither Williams nor anyone else realized, though, was that Razzano was doing the same thing: She was putting aside her fatigue, her injury, her double-faulting, and getting on with the business of winning the match.

"Speak in French when you can't remember the English for a thing--turn out your toes when you walk--and remember who you are!"

At first, it looked too easy. Razzano went up 3-0, and soon, she was up 5-0. Then Willams won a game. And then, not unexpectedly, she broke the Frenchwoman when she served for the match. Williams held,  and Razzano's anxiety became amost unbearable to watch. But Williams hadn't let go of her nerves, either. Serving once again for the match at 3-5, Razzano went through just about everything--good and bad--in her repertoire. She hit an ace. She double-faulted. She set up winners and couldn't complete them. She held seven match points, all saved by her opponent. There were twelve excruciating deuces. Williams held four break points and failed to convert them. Then, finally, on her eighth match point, Razzano did what no one else has ever been able to do: She took Serena Williams out of the opening round of a major.

As thrilling and heartbreaking as these events were, it should be pointed out that they were played against the background of Asderaki's apparent preoccupation with the hindrance rule. Early on, she gave Razzano a hindrance warning (something she failed to give Williams in the 2011 U.S. Open final) when Razzano yelled before a ball reached her opponent. Later in the match, Asderaki would default Razzano two points because of the hindrance rule. On the second of these occasions, Razzano had (not very loudly) groaned in pain when her leg began to cramp.

There needs to be a hindrance rule, but someone, somewhere, needs to firmly define what a hindrance is. Even Asderaki doesn't seem to be clear within herself what is is. Some might say that this sudden focus on yelling and crying out and the hindrance rule has something to do with the WTA's concern over the sounds players make, but that would sound conspiratorial, wouldn't it?

Never mind. Razzano won the match in spite of the defaults, in spite of cramping, and in spite of history. And as tense and anxious and error-ridden as Williams was, there was still magic coming off of the Frenchwoman's racquet during much of this contest.

I don't usually throw flowers at commentators, but Rennae Stubbs' thoughtful comments about Williams and her sensitive interview with Razzano added to the emotional depth of this event.

In many ways, it's sort of "good" that Razzano ended up winning this match. If it'd gone the other way, there would have been a lingering stench associated with it due to Asderaki's actions during this match.

Of course, some would say they're STILL there, no matter the ultimate outcome.

No matter which player anyone wished to win, though, I WILL say that the match ended precisely as it should have -- with all eyes on Asderaki as she scurried over to check the mark on the last Williams shot beyond the baseline, with everyone looking at her with bated breath, waiting for her to tell us how it is.

I had Serena down as a possible winner of the tournament this year.

Asderaki and Williams are determined to clash at every opportunity they can - and Serena kept her cool today, with the umpire looking the petulant one. This all must make Sharapova the favourite, although I think Stosur is coming on strong from the alt. half of the draw.

Even though Sharapova is playing well, her movement will always be a little shakey on red clay. The one who wins at Roland Garos is playing freely and going for shots with nothing to lose. Probably Azarenka will be playing that role best this year.

Brilliant article on the match. Just enough!
And now comes Petra, forgotten in the media frenzy to see what's 'trending' (a nasty little term used by and taliored for conformists.

Thanks, Bobby. And thanks to all for the comments. It really is all up in the air now. And yes, if Razzano had lost, there would be hell to pay today. As it is, there are just a lot of upset people.