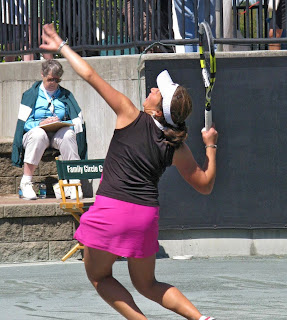 Irina Falconi of the USA, seeded 2nd at the Pan American Games, won the gold medal today when she defeated 7th seed Monica Puig of Puerto Rico. 6-3, 6-2. Falconi and partner Christina McHale won the silver medal in doubles; the gold was won by Maria Irigoyen and Florencia Molinero of Argentina, who won 6-4, 2-6, 10-6. Irigoyen and Molinero were the top seeds, and Falconi and McHale were seeded second.

McHale won the bronze medal in singles; she defeated Molinero 6-1, 6-1. The bronze medal in doubles went to Catalina Castano and Mariana Duque of Columbia. They defeated Teliana Pereira and Vivian Segnini of Brazil 6-7, 6-4, 10-6.
Posted by Diane at 9:55 PM

She is currently the fifth ranked mexican player, but thats a very low 948 rank. Her season hasn't been that impressive to be honest. Just played four torunaments, made semis at two $10,000 ITF in Mexico and in one of those won the doubles title with peruvian Ingrid Vargas. No WTA tournaments whatsoever.

The one player im keeping an eye on is Ximena Hermoso, mexican first ranked at 429. This has been her breakout season playing 21 tournaments with two titles at $10,000 ITF, then seven quarters or semis result of the same kind. Plus, two doubles titles in that same category with lots of finals. As for WTA torunaments, she fell in the first round at Acapulco and Monterrey against Goerges and Wozniak, respectively.

Oh, thanks for that information, Roi. I'll keep my eye out for Hermoso; it would be great to have a visible player from Mexico.

Hi Friends this is link to Pan American Games 2011 Results

If a single provides a established of hand grips current at his/her
position that a person uses to operate off a spring, then one can
just strengthen the grip of hose clamp looped in the springs
for gearing up for that added little bit with regard to amounts of resistance.
Here is my web blog ... bowflex selecttech 552 adjustable dumbbells