Shnyder out of Charleston in 1st round 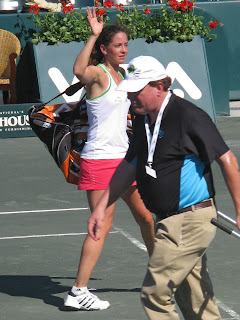 Patty Schnyder played in her 15th consecutive Family Circle Cup today, and--to the disappointment of a very partisan crowd (Charleston loves Patty)--she went out. Chanelle Scheepers, who lost to Schnyder in the first round last year, defeated the 13th seed 6-4, 6-4. Schnyder looked a bit flat, and when she went down 1-4 in the second round, it looked like Scheepers might run away with the match. But some switch got turned on in Schnyder, who then proceeded to delight fans with her signature drop shots, lobs and spins. Her serve got better, too. I thought we were going to a third set, but Scheepers was able to close it in the second.

If you've never been to the Family Circle Cup, then it may be hard to appreciate how wild the crowd goes for Schnyder. Last year, there was quick, polite applause for Caroline Wozniacki when she beat Schnyder, then the crowd broke out in yells when Schnyder made her exit. Today was sad. Schynder is still around for doubles, but this was, she said, her last ever Charleston singles match. For Charleston, it is definitely the end of an era, and the Family Circle Cup just won't be the same without her.

Patty Schnyder was a finalist in Charleston in 2002, but lost in the final to Iva Majoli; both were unseeded. Before she reached the final, Schnyder had a remarkable run in which she defeated Amelie Mauresmo, Mary Pierce, Serena Williams, and Jennifer Capriati. In 2006, after upsetting Justine Henin in the semifinals, Schnyder lost the championship match to Nadia Petrova.
Posted by Diane at 5:53 PM

Thanks for the info, appreciated.

Oops--hit the wrong key--thanks! I'm surprised I haven't done more of that now that I'm suddenly having to type on this litte keyboard.

Is Schnyder retiring this year, since you mentioned that this was her last match? I wanted her to win one more title somewhere before she left.

I think she's retiring. The retirement rumors (started by Schnyder) began in 2009, but she kept playing. But I think this is it. If she won't be playing in her beloved Charleston, I can't imagine she'll be playing anywhere next year. I was hoping that she would officially retire here (I mean, considering the sad fact that she's retiring at all).