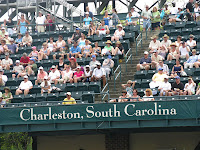 A journalist for the Charleston newspaper wrote that--now that Patty Schnyder has played her final Charleston tournament--Caroline Wozniacki is the new Charleston "favorite." I've been attending this tournament for a long time, and I have doubts about whether anyone will ever be embraced the way Schnyder was. Also, unless I'm having auditory hallucinations, a major portion of the crowd was going crazy for JJ during her semifinal match against Wozniacki.

Wozniacki, by the way, has taken confidence to a new level. After the final, she dashed in to a press conference, and then almost immediately dashed right out. The champion had to catch a flight to the ATP tournament in Monaco, where she's playing tomorrow in an exhibition match against Francesca Schiavone. So I'm left with a couple of questions: What if the second set in Charleston had gone to a tiebreak? What if it had gone to three sets? Considering the level at which Elena Vesnina played this week, either of those things could easily have happened. For that matter, either of those things could have happened against anyone.

Virginia Wade was interviewed on the Grand Lawn this morning, but, unfortunately, I missed the occasion.

Charleston fans are quirky in a good way. They absolutely cherish Patty Schnyder, they cheered wildly during Vera Zonareva's 2010 epic racquet destruction, and they come out in big numbers for doubles matches.

For the past seven years, a Russian has appeared in every final in Charleston except for the 2009 championship match in which Sabine Lisicki defeated Caroline Wozniacki. The only Russian to win the tournament, however, was Nadia Petrova, who defeated Patty Schnyder in the 2006 final.

The only retirement (no one retired against Wozniacki!)  in Charleston this year occurred when Vania King had to stop playing doubles because of a foot blister. 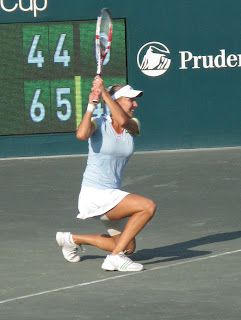 Elena Vesnina has never won a WTA singles title. She's played in five finals, two of which she lost to Caroline Wozniacki. She has, however, now won five doubles titles, and she was a runner-up in doubles at both the French Open and Wimbledon. Vesnina had a really great week in Charleston this year, and probably gained some new fans. Singles and doubles combined, the unseeded Russian played a total of ten matches. After today's doubles final, Vesnina said that she isn't going to touch a tennis racquet for a week.

I've said it before, but it bears saying again: The Family Circle Cup staff is wonderful, and the facility is beautifully maintained. The players really enjoy the tournament, too. They get a lot of personal assistance and attention (including the delivery of homemade cookies), and they enjoy the atmosphere in and around Charleston.
Posted by Diane at 10:57 PM

It's funny, last night I was thinking your enthusiasm seemed rather muted about the tournament this year. I was glad to discover your "Charleston miscellany" wrap-up.

I wonder if it is windier in Charleston than Hilton Head... I don't remember the wind being as much of an issue in prior years -- but memory is a tricky thing.

Glad you made it home safely.

I think you're probably picking up on my just being tired, David--and I was recovering from illness when I left for Charleston. The tournament was great (though the Patty part made me sad)--it always is.

Family Circle Cup always has wind, and sometimes there is a tornado! We thought we might get one this year, but the big storms passed us. It did get pretty windy, though--with stuff blowing onto the court.

There was a tornado in 2006, I think, and a significant one in 2007--on the day of the final! Jankovic and Safina had to play in very high wind. Family Circle Cup weather is really unpredictable, but you can usually count on wind.