2011 World Team Tennis finals to be held in Charleston 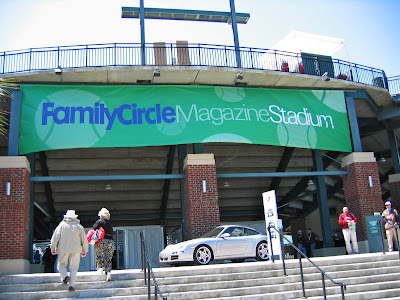 The 2011 World Team Tennis finals will be held in Charleston, South Carolina July 22-24 at the Family Circle Tennis Center, it was announced today. This is the first time the event has ever been held in Charleston, and only the second time that it has been held outside of a franchise city.

In making the announcement, WTT CEO/Commissioner Ilana Kloss said: "Charleston has such a rich tennis history, and it's a market that we have wanted to bring World Team Tennis to for a long time." WTT Co-founder Billie Jean King was also on hand to make the announcement, and she recalled the early days of the Family Circle Cup and the historical importance of the tournament. "Great tennis always finds a home in Charleston," King said.

King's vision, which became World Team Tennis, was to create a team atmosphere for the sport so that men and women could learn cooperation and leadership skills together. World Team Tennis also gives fans a chance to see both younger players who are on the rise and favorite players who have retired from the two professional tours. 2011 marks the 36th season of World Team Tennis. Players who have signed up to play this year include Martina Hingis, Anna Kournikova, Kim Clijsters, Melanie Oudin, Lisa Raymond, Venus Williams, Serena Williams, Kveta Peschke, Lindsay Davenport, and Liezel Huber.

World Team Tennis consists of an eastern conference and a western conference. Each team plays fourteen matches--seven at home, and seven away. The top two teams from each conference will compete during the finals. The Eastern Conference Championships will be held at 7 p.m. on Friday, July 22, the Western Conference Champtionships will be held at 5 p.m. on Saturday, July 23, and the WTT finals take place at 5 p.m. on Sunday, July 24. All matches will be played in the Family Circle Magazine Stadium, where a hard court will be laid over the regular green clay court.

Last year, Charleston was named America's Best Tennis Town, and the Family Circle Cup, a premier WTA event, is the only women's clay tournament played in the U.S. The Family Circle Cup was the first WTA tournament to be televised, and the first to offer $100,000 in prize money. It is also the only WTA tournament to enjoy the support of the same major sponsor (Meredith Corporation) continuously throughout its history.

The idea to host the WTT finals came about when Family Circle Tennis Center general manager Bob Moran and some of his staff traveled to Washington, DC last July to see the Washington Kastles play. Moran then met with Kloss and King, both of whom were enthusiastic about the idea of bring World Team Tennis to Charleston.

Tickets for the WTT Finals Weekend presented by GEICO go on sale April 4 at 10 a.m. EDT. Weekend packages range from $50 to $150, and single session tickets range from $15 to $55. Tickets can be purchases through Ticketmaster, the Family Circle Cup website, or by calling the Family Circle Tennis Center box office (800-677-2293).