Sabine Lisicki, who won the Family Circle Cup in 2009 when she was seeded 16th, has entered the 2011 event. Lisicki, who has suffered through a long series of injuries, illnesses and rehab, was not able to participate last year. The German player made WTA history in 2009, however, when she became the lowest seed and the lowest ranked player (63) ever to win in Charleston.

What I recall most about that event was how relaxed Lisicki was. She played the piano on the Grand Lawn, tended bar, and just looked like she was having so much fun throughout the entire tournament. After upsetting Venus Williams in the third round and Marion Bartoli in the semifinals, Lisicki easily defeated Caroline Wozniacki in the final, and looked as though she were headed toward something big. It will be good to have the affable German back in Charleston. 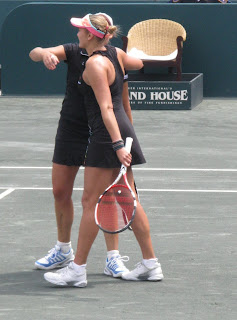 Also entering this year is 2006 champion Nadia Petrova, who was also part of the 2010 championship doubles team (Liezel Huber was her partner). Petrova also won the 2009 doubles title, with partner Bethanie Mattek-Sands. Petrova's 2006 Family Circle Cup victory was part of a major clay run that resulted, most unfortunately, with Petrova's injuring herself during practice right before the commencement of the French Open. In Charleston that year, she defeated Patty Schnyder in an exciting three-set final. This will be Petrova's seventh Family Circle Cup appearance.