It was cool and sunny today on Daniel Island, as qualifying for the Family Circle Cup got under way.  The top two seeds, Coco Vandeweghe and Sania Mirza, both won their first round qualifying matches. 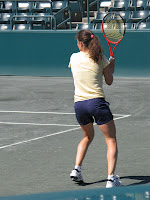 The main draw for singles was made today, with Patty Schnyder and Shelby Rogers (who are doubles partners at this tournament) assisting. In an odd twist of fate, Schnyder plays Chanelle Scheepers in the first round for the second year in a row. Last year, Schnyder prevailed. In another odd twist, should Schnyder and Rogers both win their opening rounds, they will play each other in the second round. Last year, Schnyder--who is quite a star in Charleston--teamed with Rogers to play an exhibition doubles match.
Top seed Caroline Wozniacki has a bye in the first round, and in the second round, she will play the winner of a match between Memphis champion Magdalena Rybarikova and a yet-to-be named qualifier. Defending champion Sam Stosur, who is seeded 2nd, has a first round bye, and will play either Patricia Mayr-Achleitner or Zhang Shuai in the second round.

Maria Sharapova is not in the draw, though she was offered a wild card and would have also been seeded.
Posted by Diane at 10:21 PM