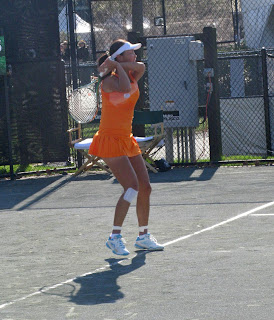 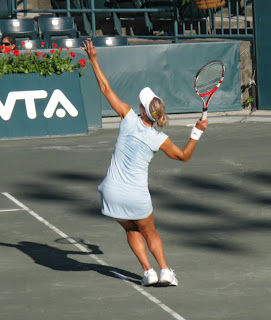 Peng Shuai and Elena Vesnina have confounded any attempt to create an orderly schedule at the Family Circle Cup because they both keep winning singles and doubles. Today, Peng defeated qualifier Sania Mirza 2-6, 6-2, 6-2 in the singles quarterfinals. She and partner Zheng Jie then defeated Raquel Kops-Jones and Abigail Spears in straight sets in doubles. Peng, who is seeded 11th, has now won more singles matches this season than anyone else on the tour.

"Honestly, I don't want to think now because just off the singles, doubles, and I'm really tired and I want to get some treatment, dinner and rest, and then this is tomorrow, so I think tomorrow," Peng said when she was asked to talk about her upcoming singles semifinal. Peng credited her coach for her 2011 breakthrough, which came after a year in which the Chinese player had a lengthy illness and was injured.

Elena Vesnina backed up her upset of defending champion Sam Stosur by upsetting 12th seed Julia Goerges in the quarterfinals. It took Vesnina a set to steady herself, but then she began serving with real conviction, and hitting winners off of both sides. Vesnina defeated Goerges 2-6, 6-2, 6-2, then--about an hour later--she and partner Sania Mirza defeated the team of Alla Kudryavtseva and Anastasia Rodionova 3-6, 6-2, 10-8. Mirza and Vesnina were down 4-7 in the super-tiebreak, but made a comeback and won on their first match point. By the time the match was over, it was no longer Friday in Charleston.

What all this means is that both Peng and Vesnina will each play twice tomorrow, and both times, they will play against each other. Peng will play Vesnina in the singles semifinals, and she and Zheng will play Mirza and Vesnina in the doubles semifinals. This is an unusual situation, it probably goes without saying. The winner of the singles match will play either 1st seed Caroline Wozniacki or 3rd seed Jelena Jankovic in the final. Neither of those players is entered in doubles competition. Peng, by the way, has a 4-1 record against Vesnina; that record includes a defeat of the Russian last year in Charleston.

The winner of the doubles match will play either top seeds Kveta Peschke and Katarina Srebotnik or 4th seeds Bethanie Mattek-Sands and Meghann Shaughnessy.
Posted by Diane at 11:52 PM