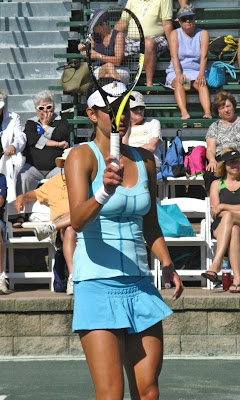 The German fans in Stuttgart got to see two of their countrywomen pick up trophies and bouquets today at the Porsche Tennis Grand Prix. German wild card Sabine Lisicki and her partner, Sam Stosur, won the doubles championsip when they defeated the all-German team of Kristina Barrois and Jasmin Woehr 6-1, 7-6.

Julia Goerges got more than a trophy and flowers. She not only won her first premier WTA event, but she did it by defeating the world number 1. She was given a shiny silveer Porsche, too, which she drove across the court after her 7-5, 6-3 victory.

Goerges has played great tennis all week. She took out Lisicki in the quarterfinals, and 5th seed Stosur in the semifinals. (She was also the recipient of a second round retirement from the ever-fragile Victoria Azarenka.) The match against Stosur was an especially good one, and Goerges had to push herself both mentally and physically to overcome the 5th seed. Today, playing in the biggest match of her career, she kept a cool head, served extremely well, and forced errors from Caroline Wozniacki by repeatedly throwing the Dane off of her rhythm and targeting the Wozniacki forehand.

The Stuttgart tournament is played indoors, so we will all be watching Goerges to see if she can maintain her progress outdoors on red clay. In Charleston, the clay surface is faster than it is in Europe, and Goerges ran hot and cold on it. Her forehand was in top form at the Family Circle Cup, but she also experienced what appeared to be mental lapses during some of her games. On the other hand, Charleston is the first tournament of the clay season, and it isn't unusual to see players struggle to make the adjustment from hard courts.

Goerges won the Bad Gastein title in 2009, and she is now 2-1 in finals. Wozniacki has yet to win a title on red clay. The world number 1, however, owns 16 titles, including the 2011 green clay event in Charleston. Goerges is the the second German to win in Stuttgart. Anke Huber won the tournament on an indoor hard court in 1991 and 1994.
Posted by Diane at 12:33 PM

I certainly enjoyed Julia Georges unexpected triumph in Stuttgart last week. Most eyes at the beginning of the week, in Germany at least, would have been on Andrea Petkovic and Sabine Lisicki. Always exciting when a new player finds their A game - with the fortitude and focus to match, to take their first big title. It will be interesting to see if Georges can maintain this form. Just a quick question... with the clay-court season now underway are we seeing any specialist's anymore (Kuznetsova comes to mind when she is on her game) ? Or in the modern era are all the top players just playing modified hard-court tennis on clay.

I was just thinking about this the other day--that the clay-court specialists a few and far between, especially around the top of the rankings. Kuznetsova and Schiavone stand out as the highly-ranked clay court speacialists, but--depending on how you read Stosur--you find the rest of them lower in the rankings.

Players who do their best on clay and who employ some form of clay "style" include Roberta Vinci, Alex Dulgheru and Maria Jose Martinez Sanchez.

With the slower grass at Wimbledon and the scarcity of clay specialization, we do seem to be seeing the same game going from surface to surface. There are also players who just can't seem to play on clay at all--who don't know how to make even small adjustments, or who try but just don't have much success (Bartoli comes to mind).

I totally agree with the article.