It was warmer today on Daniel Island, and the wind was almost non-existent. We watched Heather Watson and Lenka Weinerova play their qualifying match. Wienerova uses a backhand slice a lot to defend. She also hit a number of good forehand passing shots, but in the end, she wasn't as stable as Watson, who won the match 6-1, 7-6. The second set was tight, and Weinerova was up a break for a while, but after Watson made her shots a little safer, she was able to break back and prevail, largely because of her impressive backhand.


Bethanie Mattek-Sands had a hit with Rebecca Marino this afternoon, and Yanina Wickmayer hit with Patty Schnyder. These two were last seen together (at least by me) playing each other in a third round thriller at the 2010 U.S. Open (Wickmayer won, 7-6, 3-6, 7-6).

Even some matches aren't as entertaining as a Jankovic practice session. The 2007 champion was in vintage form today as she practiced in the stadium. She talked almost non-stop--with her coach, with her hitting partner, and with herself. Her coach, Andrei Pavel, had her working on return of serve and hitting volleys and half volleys, and she looked quite sharp out there. It was a difficult workout, and at one point, Jankovic yelled "You'll break my back!" 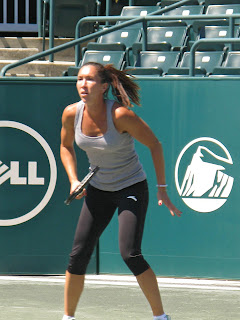 Gosh, there is a great deal of useful information above!