Nadia Petrova was very busy during her match on Thursday. The gnats were swarming, so Petrova took her towel and set about vigorously swatting, for which she received a round of applause. Then she took it upon herself to supervise the chair umpire's repair of the net, which had become unstable. The 2006 champion is now out of both singles and doubles, so someone else will have to take over. Petrova, by the way, is still dealing, to some extent, with the dizziness and fatigue that caused her to retire in Miami.


The Ketel One Racquet Club is a new feature at the Family Circle Cup tournament. The facility allows fans to enjoy indoor seating and a bar, as well as musical entertainment. It is located not far from the Great Lawn stage, where Open Access interviews are held during Happy Hour.

Jelena Jankovic is ritualistic about her clay court shoe-tapping--right, then left, then right, every time.

I missed this, but Bobby Chintapalli caught it: When Caroline Wozniacki called for her coach, the song "Independent Woman" blared through the speakers. I did hear "Sweet Caroline" start after Jankovic won a game and sat down early in her set last night.

Overheard from a sports writer: That it would be nice if all the "pretty" players won.

Among fans and members of the tennis media, there is an ongoing discussion about whether Caroline Wozniacki is boring. Some have strong feelings about the subject: 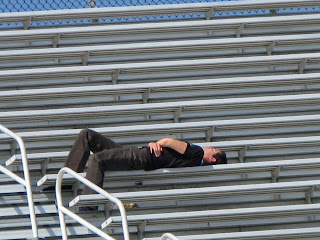 LOL. That picture said it best. She is a very nice young woman but man is she boring or what? Not even her attempts at humour were humourous. Oy

He was like that for almost the entire match!