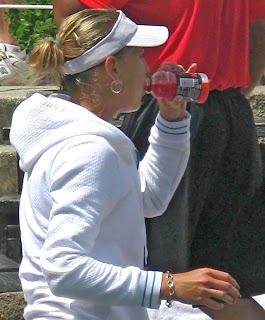 The William sisters' attempt to win the Grand Slam in 2010 was derailed in the Wimbledon quarterfinals today by the unseeded team of Elena Vesnina and Vera Zvonareva, who defeated them 3-6, 6-3, 6-4. The Russian pair had not played together since 2008, but they quickly found their groove this month at the All England Club, and Vesnina's serve was not broken once by the Williams sisters. Zvonareva has now reached the semifinals in both singles and doubles.

Also on quite a roll are Vania King and Yaroslava Shvedova, who upset the 6th-seeded team of Kveta Peschke and Katarina Srebotnik today. In the third round, they upset 3rd seeds Nadia Petrova and Samantha Stosur. Also winning in the quarterfinals were 4th seeds Gisela Dulko and Flavia Pennetta, who defeated Julia Goerges and Agnes Szavay, and 5th seeds Liezel Huber and Bethanie Mattek-Sands, who defeated 7th seeds Lisa Raymond and Rennae Stubbs.

My Wimbledon just got worse and worse with every passing day. First Venus goes out. Then Venus and Serena go out and then Federer goes out. It just gets really bad from here on in.

Posting will be light. Just not up to it these days.

Talk to you soon Diane

This is one strange tournament. Who knew that the sisters would be upset at Wimbledon, of all places?

As for Roger, he really is winding down. A quarterfinal loss at Wimbledon is the worst loss yet. At least he won in Australia; it's possible that that will be his only major this year.

I know how you feel, Karen. When your very favorites have significant losses like this, it just makes you not care. Our defending champion is still standing, though. Really too bad for Venus, though--I don't think any of us saw it coming.

Diane, never saw it coming at all. She has a back injury that she is carrying and Federer had a thigh injury as well as his right thigh was heavily taped for his second round match.

What annoys me is that the media will just use the losses of both these great champions to write their obits rather than putting the loss in context.

As I said, very sad right now. Talk to you soon sweetie.