Four years ago, Tsvetana Pironkova beat Venus Williams in the first round of the Australian Open. Pironkova  became known for upsetting big players, but she also became known for her inability to close matches; hence, her skills have attained her little other than some occasional tournament publicity.

Pironkova, in 18 tries, had never gone beyond the second round of Wimbledon, yet today, once again facing Venus Williams, she pulled out a 6-2, 6-3 victory and is now in the semifinals. Williams was definitely having an "off" day, spraying balls all over the place and missing more first serves than usual. But it would be unfair to attribute Pironkova's victory entirely to Williams' bad day: Lower-ranked players often lose against poorly-playing top players, but Pironkova held herself together, and made only six unforced errors in the match. The world number 82 stayed calm, and used her slice forehand effectively against Williams in a number of rallies; she also repeatedly changed both the speed and the height of the ball.

We've all seen Williams lose big matches, but generally not before the final at this tournament. Her 29 unforced errors took away her chance--for now--to win a sixth Wimbledon championship. 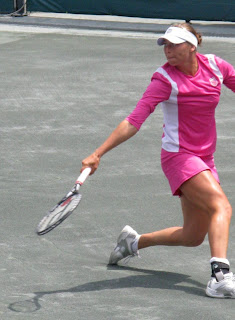 Not as shocking, but nevertheless significant, was Vera Zvonareva's upset of Kim Clijsters. It isn't that Zvonareva doesn't have the game to beat Clijsters--she is a good mover with a sometimes-blistering backhand. But as a tournament moves into its final stages, the Russian tends to wilt, and she has a history of losing to Clijsters, though the matches have often been close. Today, it was the other way around. Zvonareva lost the first set, but then came back to achieve her first win over the 8th seed.

Clijsters' serve and forehand began to fail her in the second set, as Zvonareva's backhand became only more deadly. By the third set, Zvonareva had become dominant, and won the match 4-6, 6-4, 6-2. The 21st seed goes to the Wimbledon semifinals for the first time in her career.
Posted by Diane at 1:05 PM

Awww..My Girl lost, but Venus will back! To bad for Kim too, I'm glad that she go that Justine in the slams off her back! although I don't see Kim,Maria or Justine winning wimbledon in the next couple of years, the other grandslams, yes.