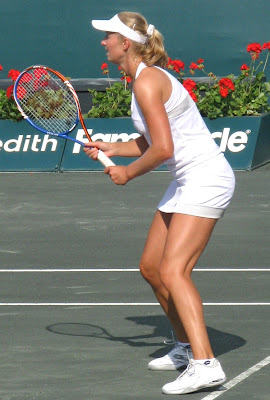 Finally, Victoria Azarenka upset 5th seed Kim Clijsters, 7-6, 6-4. Azarenka played with tape beneath both of her knees, and appeared to experience some pain during one point in the match. Azarenka has struggled for some time with problems with her knees and her thigh.

In the semifinals, Makarova will play Stosur, and Bartoli will play Azarenka.
Posted by Diane at 11:09 AM