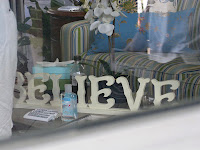 We went to see Heather Watson play Elena Vesnina, the 10th seed, the first thing this morning, and were joined by Watson's mother, who also functioned as her coach for this match. Watson played quite well, but had trouble holding her serve in the second set. With experience on her side, Vesnina won, 7-6, 6-3. At one point, I asked Mama Watson, as she is known, if Heather had ever played Vesnina. "Nobody has played us," she said.

After her first round match, Patty Schnyder was presented with a heart-felt speech, a big round of applause, and a  lovely bouquet of flowers, as appreciation for her loyalty to the tournament. She has played in the Family Circle Cup for fourteen years. Schnyder had an autograph session this afternoon, then headed for the practice courts.

There is a Family Circle Cup box whose official name is "Hebrews 11:1."

Last year, toward the end of the tournament, someone in the stands passed out. This morning, someone sitting in the same part of the stadium passed out, which interrupted play for about ten minutes.
Posted by Diane at 11:24 PM