Schnyder gets off to slow start, but prevails in Charleston 1st round 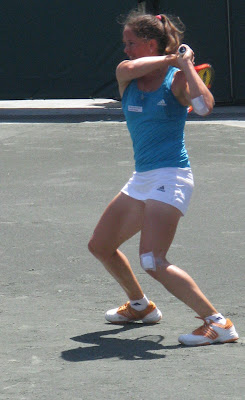 Patty Schnyder, a huge crowd favorite in Charleston and this year's 16th seed, was sluggish and error-prone in her opening set against qualifier Chanelle Scheepers today. The pair exchanged breaks at the beginning of the first set. At 3-all, the student schooled the teacher: Scheepers broke Schnyder by finishing the seventh game with a well-placed drop shot. Scheepers took that set 6-2, and--given the number of errors Schnyder was making--things didn't look too good for the Swiss veteran.

But when the second set began, the backwards-rearing, forehand-looping Patty--the real Patty--appeared on the court. Scheepers continued to play well, but Schnyder--who later remarked that crowd expectations in Charleston tend to make her first rounds here difficult--hit with much more authority after the first set. The last two sets were well-played by both opponents, but Schnyder's play was cleaner, and she was able to take control of more of the rallies. The crowd's support, which was loud and continuous, was a real boost, Schnyder said.

"I'm pretty much done, I think," the 16th seed responded to a question about where she is in her career. Schnyder said she now gets a bit tired part of the year, and it's harder for her to play in tournaments in which she doesn't feel at home. The Family Circle Cup is, of course, where she feels most at home. Even talking with fans during her practice sessions makes her work harder and longer while she is here, Schnyder said.

Next for Schnyder is Michelle Larcher De Brito. They played each other earlier this year in Fed Cup, on an indoor hard court. "She's hitting the ball and she's really trying to hit winners, but she came up with some good angles," Schnyder recalls. "We had some good rallies. I remember she had some double faults as well...."
Posted by Diane at 10:21 PM

In my opinion everyone must look at it.