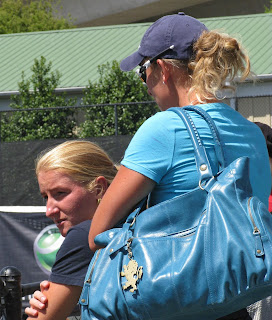 Alla Kudryattseva and Anastasia Rodionova watch Rodionova's sister, Arina, play her match
The weather was beautiful for the first day of Charleston qualifying. There was an occasional breeze, and the sun shone brightly. Nadia Petrova, Melinda Czink and Vera Zvonareva all did some practice hitting in the main stadium. The draw was held outside the grounds, at the Daniel Island Grille, but I missed it because I had written the time down wrong. 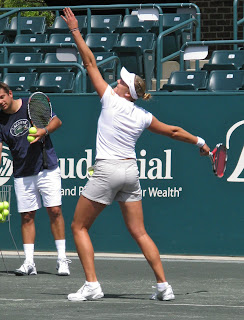 Nadia Petrova practices her serve in the stadium
This afternoon, I was walking along one of the paths and saw Heather Watson go by. I talked with her for a moment--mainly to find out why she was there. She had gotten a call this morning to come in as a qualifying wild card. Watson made it to the quarterfinals as a qualifier in the 25k tournament in Jackson, Mississippi this week. Later this afternoon, I saw part of her match against Ekaterina Dzehalevich, which Watson won in straight sets. The British star was moving and anticipating very well.

I didn't realize until a few days ago that Alisa Kleybanova had withdrawn from the tournament. Kleybanova has bilateral plantar fascitis, and had to withdraw from Ponte Vedra Beach, too. Because of various withdrawals, some new names turned up today in the draw, including that of Michaella Krajicek, who reached the quarterfinals here in 2007.
Posted by Diane at 7:09 PM

Thanks for giving us some interesting items regarding qualifying, as I don't get to hear about it very often. I wanted Stevenson to do better but hope that Watson will make some noise. You are getting to see players we never see on TV. I wasn't aware of Kleybanova's plantar fascitis-I suffer from the same thing but I am doing well with orthotics and knowing where exactly to massage my feet. It IS PAINFUL. Hopefully she will learn to manage it.
Well have fun. Hope you are well prepared for the changing weather.

Even better treatment for plantar fasciitis...the Strassburg Sock...Google it...lifesaver for me as I'm on my feet 12 hours a day being a pharmacist. Works while you sleep. Gee, you think I'd get paid for the free publicity :)

I read somewhere on the Web that bilateral plantar fascitis is very rare, and tends to be more arthritis-related.

Daniel, I had never before heard of the Strassburg Sock--interesting. I learn something new all the time.