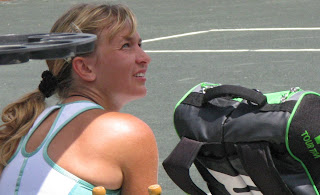 Yuliana Fedak takes a break during her 3-hour match against Alina Jidkova
The first day of qualifying in Charleston provided some entertaining matches. 3rd seed Monique Adamczak struggled with her serve a bit in her first set against Coco Vandewegh, but ultimately came through, 6-4, 6-3. It's always nice to see Adamczak's one-handed backhand.

Yuliana Fedak and Alina Jidkova didn't want to leave the court. For just under three hours, they broke each other 15 times. Finally, 9th seed Fedak defeated Jikkova 6-7, 7-6, 6-3. Fedak's forehand up the line won her quite a few points, it should be noted.

Daniel Island resident Shelby Rogers, who got a wild card into qualifying by winning the SMASH Junior Cup, had quite a cheering section at the Althea Gibson Club Court when she played Christina McHale. McHale defeated her  6-4, 3-6, 6-1. 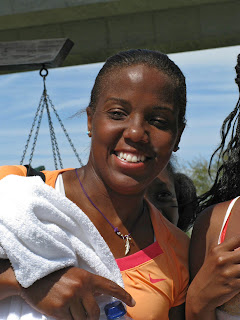