Day 1 of Fed Cup in Birmingham 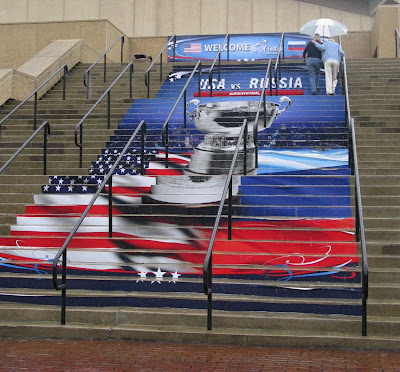 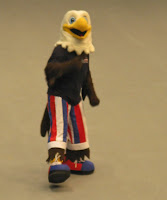 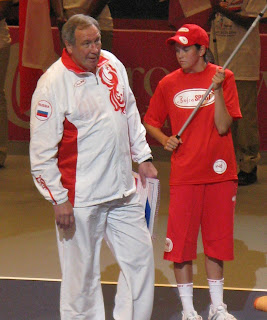 The BJCC arena is an especially good venue for a tennis tournament, and the first day of the USA vs. Russia Fed Cup semifinal was an enjoyable experience. The opening ceremony was nice, and included fireworks when team USA was introduced. The ballkids wore some of the best ballkid outfits I've seen, and Ace the American eagle mascot danced his tail feathers off, even spending some time in the booth with the New York deejay.

Unfortunately, attendance was below what we expected. The lower level of the arena was about 60% full, and there was no one in the upper level. It rained a lot in Birmingham today, so perhaps tomorrow's clearer skies will bring in more fans. There is a big art show near where we are staying, and it was rained out today, but we plan to attend tomorrow morning.

A lot of USA fans had vision problems when it came to line calls, and especially line calls made during the second rubber. The linespeople were instructed to wake up and put on their glasses, but the reality was that they did a very good job, as did the chair umpires. A woman sitting behind me, however, should be thankful that I am a fundamentally peaceful person because I had some things I wanted to tell her.

I heard some people make various comments and express surprise over Bethanie Mattek-Sands' tube socks; obviously, they are not really very familiar with the tour. Mattek-Sands has been wearing tube socks--and an assortment of other original accessories--for a long time.
Posted by Diane at 9:55 PM