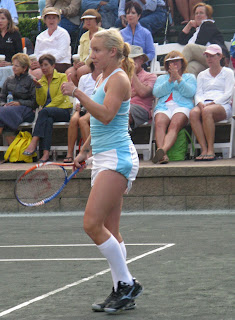 Bethanie Mattek-Sands was in Charleston last week, playing both singles and doubles. Last year, she and Nadia Petrova won the doubles championship, saving three match points along the way. This year, Mattek-Sands and partner Yan Zi were seeded third, but lost in the quarterfinals to Nathalie Grandin and Abigail Spears. Mattek-Sands won her first round singles match against Julia Goerges, but lost a tough second round contest (6-4, 5-7, 5-7) to 9th seed Alona Bondarenko. Toward the end of the match, Mattek-Sands was cramping in both thighs, a condition she thinks may have been brought on by playing several successive matches the week before in Ponte Vedra Beach.

The solid-serving American  has won seven Sony Ericsson WTA Tour doubles titles. Last year, she and Petrova upset the Williams sisters, and reached the quarterfinals of the French Open. Mattek-Sands is ranked number 14 in the world in doubles, and 129 in singles. She reached a career-high ranking of 37 last year, and is now working her way back up the rankings.

Mattek-Sands is currently preparing for a Fed Cup semifinal competition between the USA and Russia in Birmingham, Alabama April 24 and 25. In the USA's quarterfinal match against France, she won both of her matches, defeating Alize Cornet in singles, and--with partner Liezel Huber-- beating Cornet and Stephanie Cohen-Aloro in the doubles rubber.

This will be the first time that the 25-year-old Mattek-Sands has played Fed Cup matches before a home crowd. In February of last year, the USA played host to Argentina in the Fed Cup quarterfinals in Surprise, Arizona, not far from Mattek-Sands' home in Phoenix. Unfortunately, though, Mattek-Sands was recovering from a hip injury and had to sit in the stands and cheer for her team instead of playing matches. The injury put her out of action for a couple of months.

One of the players Mattek-Sands will face in Birmingham is the young Russian star, Anastasia Pavlyuchenkova, to whom she recently lost in three sets in Ponte Vedra Beach. "In the set I won, I was aggressive, and I'll have to be that way again," Mattek-Sands said. Pavlyuchenkova is not known for her court movement, but, Mattek-Sands points out, "She sees the ball really fast, so you can't really criticize her for not getting to the ball."

The American player sounded enthusiastic when she talked about the USA Fed Cup team. She will be joined in Birmingham by Liezel Huber, Melanie Oudin and a fourth player who has yet to be named by captain Mary Joe Fernandez. The members of the USA team get along well and encourage one another, Mattek-Sands told me, and there is a genuine sense of teamwork among them.

During the off-season, Mattek Sands usually does agility training, including yoga. But, she said, "This off-season, believe it or not, I did nothing. I didn't think I'd be back as soon as I did, but it's amazing how much a couple of months off can do." 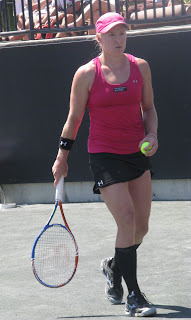 Of course, no discussion of Mattek-Sands is complete without a few words about on-court fashion. She was wearing her signature tube socks in Charleston, and said that she'll be wearing them at least through the Europrean season. When she first arrived at Wimbledon in white tube socks, the British press heaped criticism on her, but by the end of the week, London's department stores had sold out of tube socks as British woman rushed to buy them. Mattek-Sands said that she is accustomed to reading criticism of her highly individual tennis outfits, but then, "fans always come up to me and say that they love them."

"I didn't want to be known as just 'the girl with the tube socks,'" she said, laughing at the image, but she also didn't want to give up her personal, sometimes eccentric, style.

Socks, it turns out, are more than a fashion statement for Mattek-Sands. "My socks sponsor has been great," she said of Drymax, the socks she wears in order to prevent blisters. And--no surprise--Mattek-Sands will be sporting red, white and blue tube socks during her Fed Cup matches. "I'm building on my tatoo for Fed Cup," she added, so take a close look when you watch the Birmingham action on television.

And don't forget to take a look at Mattek-Sands' serving. "When I was a kid," she explained, "my dad taught me to throw a ball." Consequently, Mattek-Sands doesn't have the ball toss problem that has become all too common on the tour. And while you're watching, you'll also see the American put her doubles skills to good use in her singles play.

A team, like an individual, has a personality, the sum being greater than its parts. Team USA has recently become known for its underdog determination, a characteristic often attributed to Captain Fernandez and young Melanie Oudin. For more of that determination, plus some wit and an appreciated touch of whimsy, look to the maverick Mattek-Sands.

A strong dedication to teamwork is essential in Fed Cup competition. When it comes to team USA, most people are aware that Melanie wears the shoes; it's Bethanie, however, who wears the socks. Don't miss them--and don't miss her.
Posted by Diane at 9:27 AM