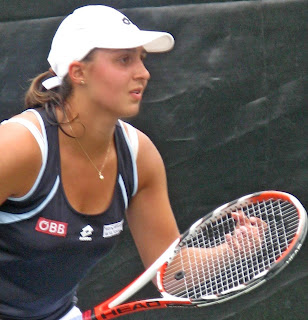 Though Tamira Paszek has a long way to go before she ignites as much controversy as Sania Mirza, she does also seem to be a magnet for drama. The latest issue for the 18-year-old former phenom is an investigation by Austrian anti-doping authorities.

Paszek has had significant back problems for a while, and now her back is giving her a new kind of problem: During one of her treatments, her blood was extracted, enriched and injected. Paszek says she did not know that this procedure had legal ramifications until she was so informed by a news reporter.
Posted by Diane at 3:22 PM