For some, the distance between Paris and London is overwhelming 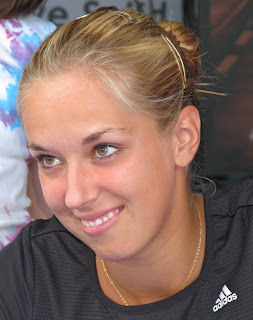 It was only a matter of time before Sabine Lisicki got herself back on track, and with her big-serving game, what better time than this week? After her Charleston win, Lisicki suffered from both an injury and a mystery illness, and her game suffered just as much. She had trouble winning matches, so she wasn't able to get match-tough. Some said that Lisicki had simply returned to her old, inconsistent ways, but--after seeing her in Charleston--I felt pretty sure the slump had more to do with her health problems.

Despite still having Safina-like double-faulting problems, Lisicki managed to reach the third round at Wimbledon, and today, she took out 5th seed and French Open champion Svetlana Kuznetsova in straight sets. Kuznetsova was never really there--perhaps she was wondering why someone had planted grass on the court. She did come in a lot, but was only moderately successful at the net. Her service stats were respectable, but she was outserved by her opponent.

Lisicki, however, had a bit of trouble closing the match, despite Kuznetsova's going down 2-5 in the second set. Lisicki served for the match at 5-3 and was broken. She said later that having to serve with new balls was difficult for her. Kuznetsova saved a match point on her own serve, and when a second one came up, a nerve-ridden Lisicki threw the ball into the net. She then saved a game point, and then had a third match point, which she handled with a big mishit. Kuznetsova then managed to hold.

Lisicki held, too, and shortly, Kuznetsova was serving at 5-6, 40-0, but Lisicki reeled off three points in a row, bringing the now-crucial game to deuce. Kuznetsova got a game point, which Lisicki saved, then Kuznetsova saved a fourth match point with a sharp cross-court forehand. Finally, Lisicki won the match, 6-2, 7-5, on her fifth match point.
Posted by Diane at 1:42 PM