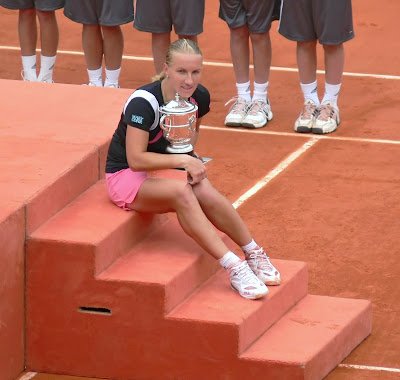 Photo courtesy of Angelica
For over a year now, when Dinara Safina has found herself at a set and 2-5 down, she has come out of nowhere and taken us all on the Thrill Ride that caused me to create that name for her. Today, at Roland Garros, she was down a set and serving at 2-5, and--while things didn't look good at all for her--I had to wonder: Is she about to do it again?

The answer was no. Already troubled by the damp conditions that slow down the ball, and already more than troubled by an on-spot Kuznetsova--who likes a slow court--Safina double-faulted on championship point. That final double fault, one of seven in the match, was--unfortunately--a fitting ending to Safina's disaster of a day.

The conditions were especially nice for Kuznetsova, who was better able to neutralize Safina's powerful groundstrokes. Kuznetsova put on quite a clay court show for spectators--spinning the ball, changing the pace, and finding angle after angle. She also made Safina do a lot of vertical court movement, something that is not her strong suit.

The match began with an exchange of breaks, which set a nice clay court tone. Serving at 3-4, Safina saved a break point, but then got broken anyway when a ball hit by Kuznetsova failed to bounce, and Safina could not pick it up. However, when Kuznetsova served for the set at 5-3, she was broken at love. She went on to win that set, however, 6-4.

At 2-all in the second set, Kuznetsova went down 0-30 while serving, but Safina was unable to exploit this opening. Down a set and 2-4, she yelled at her coach, "Why am I such a chicken?!" Pushing back tears, Safina once again saw a major title slip away from her. At the conclusion of the match, she smacked her racquet on the clay, then composed herself and walked to the net to shake the hand of her friend, Svetlana.

It is well worth noting that Safina had multiple opportunities to win more points and more games--opportunities that she created. But--over and over--she would set up a winner, and then hit an unforced error at the crucial moment. The only explanation for this phenomenon is one involving mentality. Safina knew what to do--she even did it. But she was too unsteady to finish it. Interesting, Kuznetsova made the same number of unforced errors--22--but hers were not always made at such important moments.

Kuznetsova's 6-4, 6-2 victory is the lastest in a long string of two-set French Open women's championship scorelines.
Posted by Diane at 11:13 AM

Called it a win for Kuznetsova awhile back. Safina let the people in her head get to her again. It's funny though, after her semi's win she said, that if she's not playing well it would still be diffcult to beat her. Well, she was beaten today tears and alL. Her confidence or should I say arrogance was no where to be found. Great win for Kuznetsova though.

I don't consider Safina arrogant. The truth is--she tends to be more dangerous when she's not playing well; that's when she does that crazy come-from-behind stuff.

(I also don't have a problem with Serena saying she's the best in the world. My problem occurs when a player doesn't give an opponent any credit at all for winning.)

In my opinion, today highlighted for me why Safina will never win a Grand Slam: Her serve is awful, her movement up and down the court is possibly even worse and her mental state is hardly stellar. However, congratulations to Sveta on actually introducing some variation and doing it very well today. I am a massive fan of hers.

I know also think that on court coaching should be banned as it is obvious how many players are becoming dependent on their coaches' advice during matches.

Man, oh, man! Congrats, Sveta! With those 2, can't really say the outcome was shocking though I thought that Dinara would've taken it in straight sets simply because of the way she was playing and how badly she wanted it. Sveta I thought would claim the title if it went to 3. Poor Dinara. I wonder if the outcome would've been different -- 3 sets, perhaps -- had she played Serena in the final...

I just think that Dinara cannot control her anxiety when it comes to major finals. That's not to say I think she would have won if she had controlled it--I had no idea who was going to win.

In this household, we said that if one of them could control her mental issue and the other one couldn't, it would be over fast. That's exactly what happened. We were hoping they could both control their heads, but it wasn't to be.