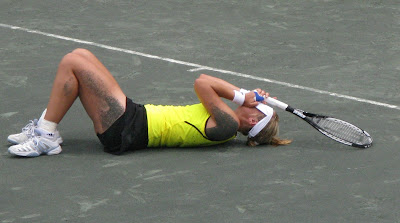 In the most remarkable run to the championship in recent Family Circle Cup history, 16th-seeded Sabine Lisicki claimed the title today without dropping a set the entire tournament. The German serving machine hit nine aces in the championship match--one as fast as 125 mph. and one as slow as 71 mph.

In the very first point of the match, Lisicki and her opponent--Caroline Wozniacki--traded drop shots. Lisicki broke, then hit an ace immediately in her first service game. It wasn't long before she hit a forehand down the line to claim the first set, 6-2.

Wozniacki lifted her level in the next set, holding at love right away. She then went down 2-4, however, but Lisicki hit two failed drop shots, after having success with drop shots throughout most of the tournament. Wozniacki struggled to stay in the match at 3-5, but elevated her service game to go up 4-5.

In her final service game, the occasion finally got to Lisicki, who had cruised through the tournament with confidence to spare. It took her six match points to win the championship, and the last game was the most thrilling of the entire match. Lisicki wound up with a first serve win percentage of 86, a second serve win percentage of 46, and 25 groundstroke winners. She was never broken by Wozniacki. Lisicki is the lowest seed ever to win in Charleston, though unseeded players have won the tournament twice.
Posted by Diane at 3:28 PM

If clay is Lisicki's least favorite surface then I'm excited to see what she can do on grass and hard. Very impressive today.

I'm wondering about that, too. She has obviously worked very hard on refining her game, and should continue to improve.

Great job Sabine! I just discovered this talented girl back in January during the Hopman Cup. I could tell there was something special about her! I wish her the best for the rest of the season!

She had a good Hopman Cup experience. I think she worked really hard in the off-season--so much changed when she returned this year.