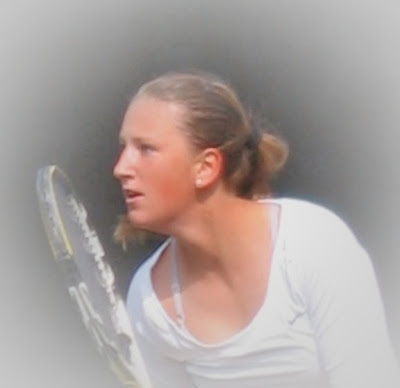 Victoria Azarenka's parents possessed some prescience when they named their daughter. For some time now, some of us have predicted great things for the 19-year-old, if only she could overcome her nerves. When she finally won a tournament, after having been a finalist in four others, she began to look more confident, and she worked on controlling her temper on court.

Yesterday, against Svetlana Kuznetsova, Azarenka's nerves returned, but she managed to overcome them in the end. Today, playing an injured Serena Williams--after a shaky start--she looked simply marvelous. Hitting powerful groundstrokes and displaying a fluidity of movement that belies her frame, Azarenka won the Sony Ericsson Open, 6-3, 6-1.

We saw top seed Williams limping through her semifinal, so it was no surprise that she had trouble moving in today's final. Her injury spoiled what could have been an outstanding match. Azarenka, for her part, had the maturity to forget her opponent's disability and get on with the match.

Azarenka's path to the final was not an easy one. She defeated Anastasia Pavlyuchenkova, Anna Chakvetadze, Agnes Szavay, Samantha Stosur, and Kuznetsova. Next week, she will be number 8 in the world.
Posted by Diane at 1:45 PM

Do you remember an old song from the sixties, Diane, by The Kinks( I went to see them play and very good they were, too), called......"Victoria"? (showing my age...grin...)....seriously, that was going round and round in my head when I looked here and saw your title :)

really pleased for her!

I don't remember "Victoria." The last I checked, however, Ray Davies lived just across the lake from me.

I'm really pleased for Vika, too, though I feel really bad for Serena.

I have to admit, I am not as excited about Azarenka as many others are, as I just find her attitude, her game and her screeching just so typical of many of today's up and coming players. I just don't get it. Sorry!

I felt that way about her for a time, Matt. But she has matured a bit (still has a way to go, no doubt), and has improved her fitness. I've seen her play up close a few times, and--despite the screaming--I did enjoy watching her beautiful strokes. Her coach and trainer are working with her to get her to go to the net more--it's not like she can't--she won the U.S. Open mixed doubles title.

Would I rather it was Radwanska who was breaking through in a big way? Sure--I really enjoy watching her play. But it isn't--it's Vika. JJ is a mess, Safina has returned to being a head case. We needed some new blood, and we have it. (We also have the resurgence of Vera Zvonareva, which is even better.) I think Azarenka is the real thing.

United States Restaurant Guide - a guide to every restaurant, http://restaurants-us.com/in/Southport/E%20J%27s%20Diner/46227/