Venus out of Charleston in third round 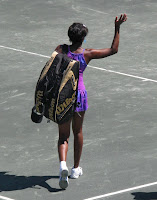 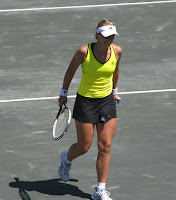 Though 2nd seed Venus Williams held the lead in both sets in her third round match against Sabine Lisicki, the young German never seemed especially bothered by being behind--not even when her serve failed her repeatedly in the second set. She merely picked up her service level again, and hung on, stinging the second serves that came off the Williams racquet.

Lisicki is not the player she was even last year. The relentless and hard ball-striking is still there, but it is now tempered by more thoughtful point construction and more shot variety.

Lisicki's next opponent will be Elena Vesnina, who is having a breakthrough season.
Posted by Diane at 10:23 PM