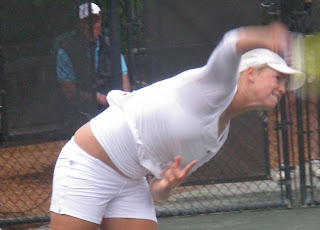 With two singles wins apiece, the USA and the Czech Republic played a deciding doubles rubber today in their Fed Cup semifinal, and for the first two-thirds of the match, it looked as though the Czech Republic was going to run away with the victory. Iveta Benesova's expert serving and Kveta Peschke's mighty forehand and great net play gave the Czech Republic an easy first-set win of 6-2. The second set went just as well for them until they had a match point on the USA's serve, at 2-5. Peschke missed an easy second serve return, and this error was essentially the end of her run. She was nothing but a mass of errors after that, and her demise did nothing to help the always-fragile Benesova.

About the time Peschke melted down, Bethanie Mattek-Sands of the USA appeared to come out of a sleep, and to play the kind of aggressive doubles tennis of which she is capable. This sparked Liezel Huber, who also began to look more like herself. The USA, after holding at 3-5, then broke the Czech team when they served for the match. They were then able to take the set to a tiebreak, which they won. The third set was all USA, with Peschke and Benesova reduced to shadows of the players they were earlier in the match. With a 2-6, 7-6, 6-1 win, the team took the USA to the Fed Cup final for the first time since 2003.

Emerging as the star of this Fed Cup semifinal, however, was Alexa Glatch, whom captain Mary Joe Fernandez chose because of her expertise on fast courts. Glatch--who had never before played in Fed Cup competition--won both of her singles matches, and won them quite easily, allowing both of her opponents, combined, to win a total of only six games.
Posted by Diane at 12:17 PM

How about Alexa Glatch's performance! Mary Joe Fernandez is certainly getting the best out of her rookies -- remember Oudin in Surprise! I can't help but wonder how this tie would've turned out had the Czechs chosen clay instead. Final should be interesting.

Granted I only saw bits of the fourth and fifth rubbers of the USA-Czech Republic tie but I was a bit surprised at the body language of the Czech team. Glatch, for a rookie was quite poised, I thought. Of course, being higher ranked and more experienced, the Czechs had more pressure on them. I guess sometimes pressure ISN'T a privilege. What do you think, Diane?

If they had played on clay, Oudin would have played instead of Glatch. Oudin's performance in Charleston was excellent, until she was frustrated by Bartoli's returns. Still, it was a very good run.

I really like to watch Alexa, and I hope that this past weekend gives her a lot of confidence.

I do think the Czech Republic had more pressure because the Czech team was considered the favorite. Benesova has never been able to handle pressure, though, despite her considerable talent (another player who should be ranked higher). And the "pressure is a privilege" maxim is for athletes who are really mature and know that the mental aspect is crucial. I remember a journalist asking Chris Evert what it felt like to be a champion, and--I can't quote her exactly, so I'll paraphrase--she said something like "It's when you're down a set and 2-5, and you know you're going to win."