Some losers are luckier than others 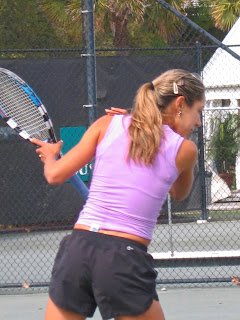 Lucky loser Varvara Lepchenko upset 4th seed Patty Schnyder 6-2, 6-0 today in the first round of the MPS Group Championships in Ponte Vedra Beach, Florida. Once again, Schynyder's service game suffered, and helped to give her yet another early defeat in what is, so far, a poor season for her.

Lepchenko, who was seeded third among qualifiers, was upset by Anastasia Rodionova in the final round of qualifying. She entered the main draw when Jelena Dokic withdrew.

Also upset in the first round was 6th seed Peng Shuai, who lost to Elena Vesnina.
Posted by Diane at 9:03 PM