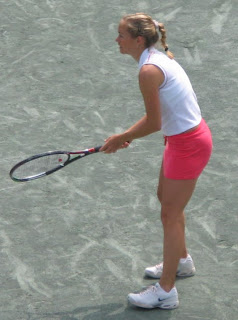 I have no idea why Serena Williams went to Marbella, Spain to play in the Andalucia Tennis Experience. She had two injuries--her thigh and her ankle--yet she insisted on going. It wasn't worth the travel stress--she went out to Klara Zakopalova in the first round today, 6-4, 3-6, 6-1.

I now expect Williams to withdraw from Charleston, where she is the defending champion. Makes no sense. And on April 20, she will lose her number 1 ranking to Dinara Safina.

So is it definitive? Dinara Safina will be number 1 whatever scenario possible? ... Gosh, how weird is that position this year, it should be named "number 1 tennis player for the points earned last year only, cause this seasson is their worst ever".

I know, winning a grand slam is not the condition for being a number one player, Kim Clijsters took some time to win one of those, but come on. I mean no grand slam title, no premiere title, no international title... so frustrating from a fan point of view.

The system is pretty strange, huh? At least Dinara was a finalist in a major, and she did win the 2008 U.S. Open Series. I fear this is going to mess with her head even more, though.