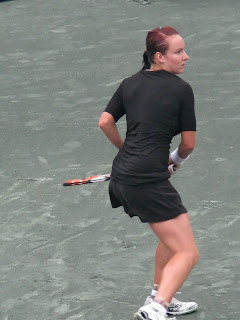 Bethanie Mattek-Sands was supposed to have played for the U.S. Fed Cup team in February when the U.S. played Argentina. In fact, she lives just half an hour from Surprise, Arizona, where the tie was held. But Mattek-Sands sustained a hip injury and had to withdraw. She is now set to play in the semifinal between the U.S. and the Czech Republic April 25-26 in Brno, on an indoor hard court.

Joining Mattek-Sands will be Melanie Oudin, Alexa Glatch and Liezel Huber.
Posted by Diane at 12:13 AM