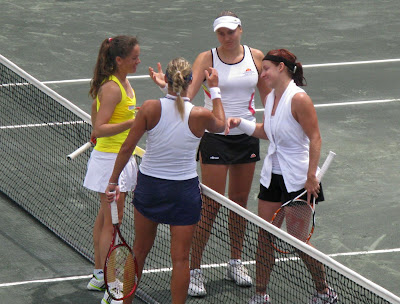 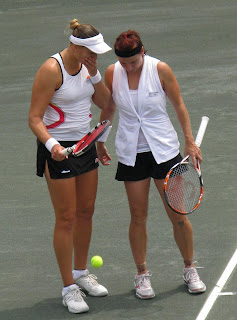 In the first half of the first set of the doubles final in Charleston today, a lot of errors were made by both teams, but both teams managed to hold serve. Even serving at 3-4, 0-40, Nadia Petrova managed to hold serve. At that point, the quality of serving increased significantly among all four players, and the set went to a tiebreak, which Liga Dekmeijere and Patty Schnyder won on their first set point with a volley from Schnyder.

The super tiebreak appeared to be all about Dekmeijere and Schnyder, who went up 5-1 right away. But at 9-6, with the championship on their racquets, they watched Mattek-Sands and Petrova save three match points, then win the tiebreak 11-9.
Posted by Diane at 3:20 PM