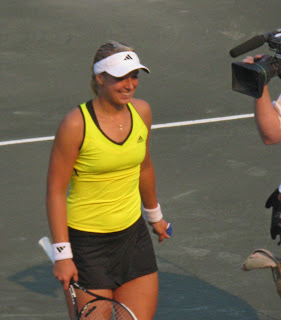 Since arriving in Charleston, Sabine Lisicki has tended bar, played the piano, signed autographs, taken out Venus Williams, and made it to the semifinals. What's next for the tall German with the big serve?

This afternoon, she played in a quarterfinal match I thought might be the best of the day, but the match took a twist I wasn't expecting. Elena Vesnina, who is having her best season to date, has been nothing but impressive in Charleston. She emerged the victor in the tournament's only real thriller--her second round contest against Patty Schnyder--and she came from 1-5 down to take a set off of Victoriya Kutuzova. The prospect of seeing her perform against Lisicki had me excited.

The first set had promise, especially toward the end. Lisicki served for it at 5-3, and was broken. This was not a surprise since--at this point of the match---Lisicki's serve was quite inconsistent. At 4-5, Vesnina found herself facing two set points on her own serve. She saved one with a drop shot. She then hit an especially good serve, but the wind came up about then, the ball got a bit out of control, and Lisicki broke her to take the set.

Lisicki began the second set as she had begun the first--with an ace. She lifted her service game to the point that even her service weaknesses had little impact on her momentum. At one point, she served an ace, a double fault, and then another ace. In the meantime, Vesnina was having difficulty with her own serve, and making many errors. She simply did not resemble the player who had been so stunning throughout the week. Lisicki--who had a 70 win percentage with her first serve and a 45 win percentage with her second--took control of the rallies, and effectively knocked Vesnina out of the running, defeating her 6-4, 6-0.
Posted by Diane at 11:42 PM