Family Circle Cup, day 6--in and around the grounds 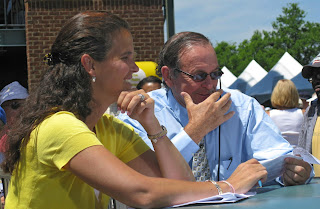 The younger players who won titles in the SMASH Junior Cup were given their awards this afternoon in the stadium, and Murphy Jensen should get some kind of special sexism award. As each of the boys received his award, Jensen shouted "New tradition! Take a victory lap!" and each boy ran around the stadium. When he got to the female winner, he said "Only guys take victory laps--you can curtsey, like at Wimbledon." I wanted so badly for the little girl to take off on a run around the stadium, but she did what she was told.

Mary Joe Fernandez and Cliff Drysdale once again set up a broadcasting booth outside the stadium, and did some serious tennis player name mispronouncing for ESPN. I don't think they got one name right. The Family Circle Cup tournament announcer got most of the names right last year, but didn't do as well this year. Still, he did better than most.

Tennis fans and tennis writers everywhere are talking about the many injuries that have plagued this year's Cup--Serena Williams and Victoria Azarenka both withdrew right before the tournament began. Tamira Paszek hurt her hand, Vera Zvonareva fell and tore two ligaments in her ankle, Chuang Chia-Jung hurt her shoulder and retired from a doubles match, and Dominika Cibulkova retired in her quarterfinal match because of a back injury.

But it wasn't just the players who got injured. When we arrived at the tournament this morning, there was an ambulance ahead of us, ready to pick up someone from a court. At first, I thought that a practicing player was injured, but I think it was a local player who was using the court. And in the middle of the semifinal between Elena Dementieva and Caroline Wozniacki, play had to be stopped because a fan in the stands was injured and had to be taken out on a stretcher.
Posted by Diane at 10:19 PM