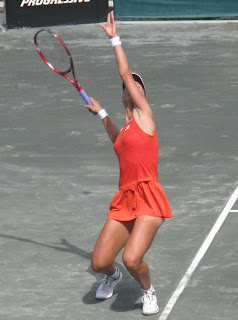 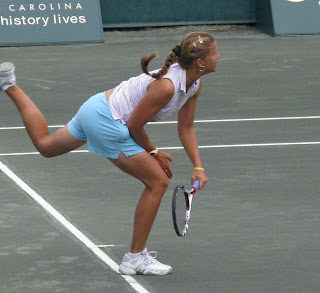 By the time I got to the Nadia Petrova-Melinda Czink match in the stadium (I'd been watching the match between Elena Vesnina and Victoriya Kutuzova), Petrova, the 4th seed, had taken the first set 6-3, and it was 4-all in the second. Czink won that set, and after that, she steadied herself and waited for Petrova to make errors.

She didn't have to wait long. Petrova--who hit thirteen aces in the match (Czink hit ten)--began to struggle with her second serve, and before long, she began to struggle with just about everything. She served for the match at 5-4, and was broken at love. About that time, the wind picked up, making things even more complicated. Petrova saved a match point when she served at 5-6, 15-40, but Czink took the final set 7-5, and the 2006 Family Circle Cup champion walked off the court without even been acknowledged by match announcer Murphy Jensen.

I saw Czink play here in 2007, and she was unimpressive. She has obviously been working very hard; she is having quite a nice season.

The first set of that Vesnina-Kutuzova match, by the way, was worth seeing. Kutusova easily went up 5-1 in the first set, then Vesnina--out of nowhere--leveled the match at 5-all. Kutozova went on to hold a set point, but Vesnina saved it, and won the set in a tiebreak. I left after that, and when I went outside the stadium to check the scores, Vesnina was up 4-2 in the second set. She then went up 5-2, and Kutuzova won three games in a row, to put it at 5-all. She was broken again, however, and Vesnina won the match 7-6, 7-5.

Kutusova has a formidable forehand, and her backhand is nothing to sneeze at, either. But in this match, Vesnina was the stronger, cleaner hitter, and she was able to control more of the rallies.

5th seed Caroline Wozniacki, who has been playing under the radar in Charleston, quietly put away 10th seed Peng Shuai, 6-3, 6-4, while top seed Elena Dementieva had an easy time of it with Varvara Lepchenko, defeating her 6-1, 6-1 in just over an hour.

Not having as easy a time was 7th seed Dominika Cibulkova, who was challenged by the new and improved Anastasia Rodionova. I saw only a little of this match, which Cibulkova won, 6-7, 6-2, 6-3.

The most unfortunate event of the day was an untimely slip on the clay by 3rd seed Vera Zvonareva, who many of us thought was poised to win the tournament. Zvonareva was playing Virginie Razzano, and the score was 1-all in the first set when the Russian fell. She was unable to get up, and was in a lot of pain from twisting her ankle. She was helped off of the court and taken away by the medics, sending Razzano to the quarterfinals.

In 2006, Zvonareva hurt her wrist in Charleston and was out for months, though she did avoid surgery. Last year, she was the finalist--and now this. Today, I was still sad from Patty Schnyder's second round loss, and Zvonareva's retirement really did me in. I just hope that she does not miss the entire clay court season. She is staying in our hotel, and I wonder whether we will see her hobbling around in the morning. Wherever she is--I wish her a very fast recovery.

There was another retirement this evening: The 2nd-seeded doubles team of Chuang Chia-Jung and Elena Vesnina retired after they lost the first set (1-6) of their quarterfinal match against Liga Dekmeijere and Patty Schnyder. The retirement was the result of a shoulder injury sustained by Chuang.

In the other doubles quarterfinal played today, the number 4 seeds--Bethanie Mattek-Sands and Nadia Petrova--defeated Mariya Koryttseva and Galina Voskoboeva, 6-0, 6-4. Petrova had her moments, but it was Mattek-Sands who did the real work--whizzing groundstrokes past her opponents over and over.
Posted by Diane at 11:36 PM

Just discovered your blog and really enjoy it.