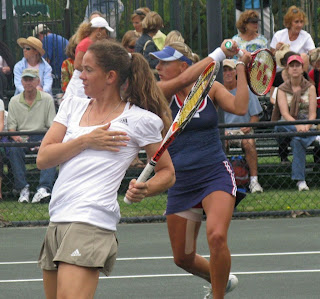 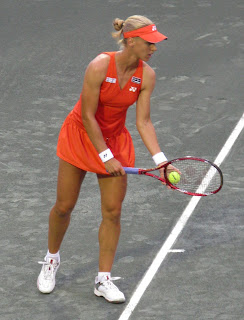 Top seed Elena Dementieva was in very fine form in the stadium Tuesday night
I saw parts of several matches today, and a couple of matches in their entirety. An early one I didn't want to miss was a 2nd round contest between Dominika Cibulkova and Tamira Paszek. The first set was close, with Cibulkova taking it 6-4 (there were three breaks in the set). Near the beginning of the second set, Paszek fell and hurt her hand. She received some treatment, then proceed to hit just fine. But she was never the same. Paszek's decline seems to have been merely coincidental in that it occurred after the fall. She became unsure of herself, lost her rhythm, and was dominated by a smooth-moving, accurately hitting Cibulkova, whose backhand was on fire. Paszek failed to win a game in the second set.

I also saw the first round match between Sesil Karatantcheva and Sania Mirza, two players who have been surrounded by controversy in the last couple of years. I had not seen Karatantcheva in so long, and her appearance has changed a lot; she is now a young woman, and taller and stronger. She wasn't quite strong enough to beat Mirza, however, mostly because of a lackluster serve. Mirza took the match, 6-4, 6-4.

I saw a lot of the 1st round match between Bethanie Mattek-Sands and Mariana Duque Marino. I had never before seen Duque Marino play, and was impressed by her clay court skills, especially her movement. She stayed close to Mattek-Sands throughout the first set, but was dominated in the tiebreak. After that, things got interesting. The first game of the second set contained so many deuces, I lost count--but it was perhaps the most I have ever encountered in one game; the second game contained a great number of deuces, also. We left after that game because we wanted to watch something else. Mattek-Sands won--7-6, 7-5.

At some point in the afternoon, we entered the stadium to see if we could get a glimpse of Nadia Petrova at the end of her 2nd round match. Instead, we got a glimpse of a 6-1, 2-6 scoreboard; Petrova had lost the second set to Patricia Mayr, an Austrian player I had never before seen. I don't know what happened to Petrova to make her lose her way, but Mayr looked like a woman on a mission, and was fighting hard for every point. Petrova was broken three times in the second set when her serve went to hell, but she managed to get that serve back, and won the final set 6-2.

I saw bits and pieces of a few other singles matches, and I saw the entire match between top seed Elena Dementieva and Julie Ditty. Ditty won two games. In the interview, however, Dementieva said that Ditty was injured. Following that match, I watched the doubles match between the team of Chan/Govortsova and Haynes/Osterloh. I wish that Olga Govortsova (who is looking quite fit and trim this year) had been able to play doubles with Edina Gallovits, but Gallovits is injured. However, she did well enough playing with Chan Chin-Wei. They defeated Angela Haynes and Lilia Osterloh in straight sets.

The most entertaining match I saw today was a doubles match between the teams of Dekmeijere/Schnyder and Czink/Zahlavova Strycova. Schnyder has been playing doubles with Anna-Lena Groenefeld, but Groenefeld did not come to Charleston, so Liga Dekmeijere was recruited, and she was as fine a substitute as Patty could have asked for. Dekmeijere was very aggressive throughout the match, and volleyed winner after winner for the team. Schnyder, for her part, tended to stay back and hit zinging passing shots. Barbora Zahlavova Strycova was also a very successful volleyer, and Melinda Czink--though she got off to a slow start and sometimes wobbled--served well, and made some memorable shots. Dekmeijere and Schnyder won the match, 7-5, 6-4.

There was one upset today. 15th-seeded Zahlavova Strycova lost in singles to qualifier Shenay Perry, 7-5, 6-1. With the exception of Petrova, the top seeds had an easy time of it, except for Venus Williams, who has yet to play her second round. You can find all the scores here and here.
Posted by Diane at 11:45 PM