Family Circle Cup, day 1--in and around the grounds 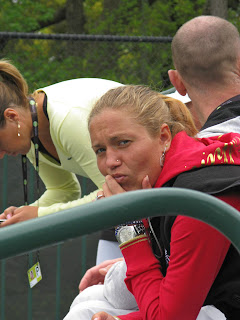 We expected rain on this first day of the tournament, and we got some, but not enough to delay or interrupt any matches. There is a tornado watch right now in the Charleston area, and it just wouldn't be Family Circle Cup without a tornado, or at least a few watches or warnings.

There was a Venus sighting this morning, but not by me. I saw a lot of players, but not Venus. We did get to see Elena Dementieva do some practice hitting, and she signed a tennis ball for us.

When we got to the tournament site, we decided to watch the match between Tamira Paszek and Julia Schruff. We stood waiting for entry, and I looked next to me: There was Dominika Cibulkova, who had come to check out Paszek, her probable second round opponent. She and her coach were there, but Cibulkova did not stay too long. Paszek was not exactly impressive, so Cibulkova probably felt she had other things to do.

I spoke with Kateryna Bondarenko, who was in the stands, watching her sister, Alona. She said her wrist injury wasn't too bad, and the doctor told her she could begin practicing again in a week. Both Bondarenko sisters signed some photos for us. It is very disappointing for us that we will not get to see them play doubles together. Instead, Alona will be playing doubles with Anastasia Rodionova. One of the "fighting Bondarenkos," as I call them, once said that the best possible situation is for them to have a third person along, "so we can fight with that person!" Given her history, Rodionova is a pretty good pick.

Tennis outfit of the day: Marta Domachowska, in a bright yellow tank and a khaki/olive split-pleat skirt. Today was the only day to see it, though--the ever under-achieving Domachowska is already out of the tournament, knocked out by qualifier Anastasija Sevastova.
Posted by Diane at 6:54 PM